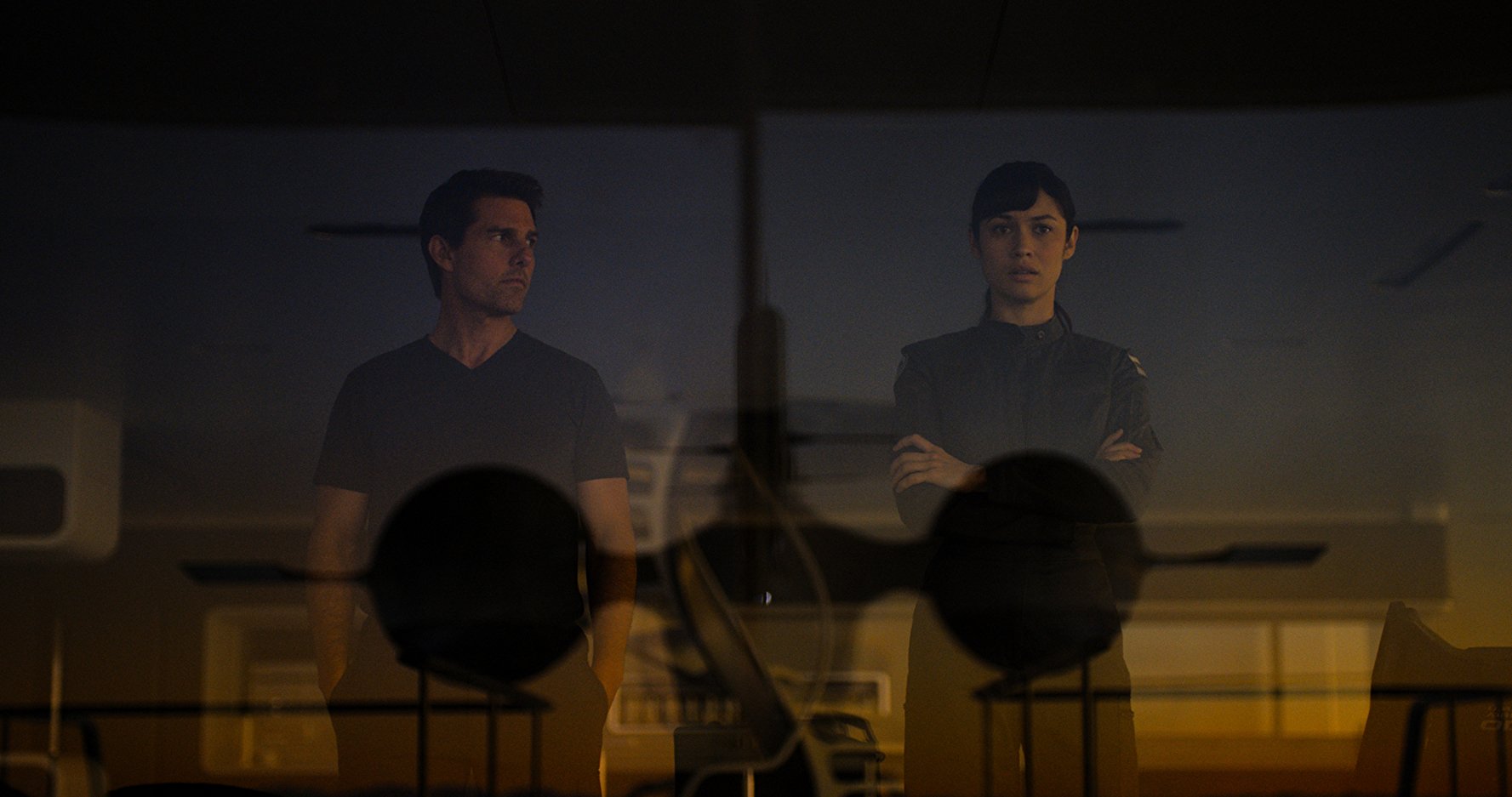 To say that Joseph Kosinski’s new Sci-Fi epic is better than his previous, Tron: Legacy, is a bit of faint praise, but it does deserve that praise.(And this is coming from somebody that liked Tron:Legacy) It’s a film that is a product of post-modernism filmmaking(lots of references and reminders of films previous) but still manages to be just original and interesting enough to keep itself afloat for the run-time.

The plot revolves around Jack Harper(Tom Cruise) who is a drone maintenance repairman on a alien-war-ravaged Earth in 2077. Most of the planet has supposedly been made uninhabitable by not only the war, but also the destruction of the moon. Jack’s job is to perform maintenance on the drones that guard the massive turbines that mine the Earth’s remaining water and resources to power a journey to Jupiter’s moon Titan. Working with him is his romantic communications officer Victoria (Andrea Riseborough), both of them working under Sally(Melissa Leo), who they only communicate with via video conferencing. The rest of humanity is up on the TET, a massive spaceship meant to take the human race to Titan in 2 weeks time. Everything changes when a spacecraft crashes in Jack’s sector with a woman claiming to be from his past, Julia(Olga Kurylenko) As for the rest of the plot, I’ll try to remain as spoiler-free as possible, referring to only what can be gleamed from the trailer as this film does have it’s fair share of twists, turns and revelations.

Tom Cruise seems to be in a phase in his career where seems to want to attach himself to every blockbuster/tent-pole/franchise actioner that he can. And don’t get me wrong, I’m totally fine with that. Whatever keeps allowing me to watch Tom Cruise run in a film is good. Seriously, watch that man run. Nobody looks as good running as he does. He’s turned it into an art form, and perfected that art.

But like I was saying, he just hit 50 and seems to want to get in as much ass-kicking as he can before he’s too old for it. I think he does this because he knows they’re still be roles for him his whole life, but none of these types of roles. He performs admirably in this film, as always. He’s got a real charisma about him, and manages to reel in the more complex emotions going on in his character in Oblivion. I’ve always been a fan of Tom Cruise, even when he was better known for his antics than his acting.

The rest of the cast does well in the film too. Morgan Freeman once again plays the leader of the free world, but who could get tired of watching him do that role?(Or get tired of just watching him, period.) Andrea Riseborough is a real actress to watch as well, she’s always turning in great performances despite the quality of the films she’s in.(Prime example: W.E. Atrocious film, great performance)

Joseph Kosinski knows how to pick his composers, recalling back to Tron: Legacy in which Daft Punk provided one of the best scores that year. This time around he’s enlisted fellow electronic group M83 to score Oblivion. They provide a fantastic score, fitting the mood of each scene. It’s no wonder he picked them, as their music previous to this was already incredibly cinematic and epic.

With Oblivion, Kosinski has stretched his wings as a director a bit, but not as far as we would all like him to. He obviously has a very precise sense of look and aesthetic, every shot in this film is clean, and well-framed, much thanks to DP Claudio Miranda. He also pulls off CGI effects much better this time than in Tron: Legacy. One thing that still seems to lack from him lies in the story and script. There are more than a few moments where the story gets muddled in itself and falls into tired cliches.

With that said though, the 3rd act of this film is rather impressive, and provides a lot of clarity for the problems it has previously. While a somewhat generic film, it’s still a marvelous one to look at, and has just enough originality to it to keep it interesting and prevent it from being forgettable.