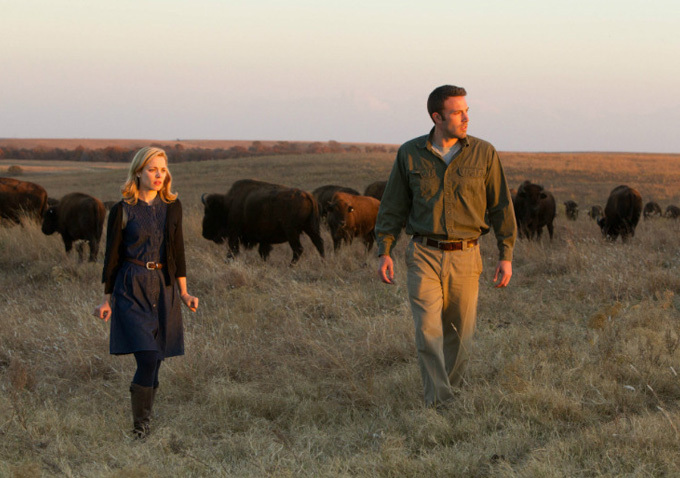 I know I’m quite late to this party, but I just finally had the chance to watch Terrence Malick’s latest film. To The Wonder could probably be best described as a visual poem about love. And if that’s how we define it, then it’s a magnificently affecting and beautiful poem.

There’s not much plot here, a man(Affleck) has a romance with a woman(Kurylenko) in Paris and brings her and her daughter back to live with him in the states. Trouble sets in and he soon reconnects with a childhood romance(McAdams). That’s the sort of logline that’s been thrown around, but it doesn’t service the film much. It would be easy to criticize the lack of plot and character information in this film, in fact that’s been my complaint with most of Malick’s films. But here it all somehow works.

This film does not revolve around it’s plot and character motivations, but around moments. Moments of love in all it’s shapes and appearances. Moments with these characters the audience seems to be peeking in on. It’s because of Malick’s ability to capture reality in all this that makes it stick. That reality is largely thanks to his regular cinematographer Emmanuel Lubezki. Lubezki has repeatedly proven himself a master of natural lighting and hand-held aesthetics. In this film he works wonders with the scenery, doing a sort of dance with the actors.

Malick has always gotten great performances out of his cast. Here is no different. Affleck, Kurylenko and McAdams are near-perfectly cast in their roles. Javier Bardem has the meatiest of the roles in my opinion, giving a heartbreaking performance as a priest who is losing his faith, beaten down by all the suffering he witnesses in those around him. Malick seems to be hitting the jackpot lately with his child actors. The boys in The Tree of Life were magnificent, and here, the character of Kurylenko’s daughter Tatiana is played by a young girl named Tatiana Chiline. She is a true wonder to watch perform.

When I popped in the DVD, it began with a note to turn up the volume very loud to experience the sound optimally. This brought a smile to my face, recalling when I watched The Tree of Life for the first time(Unfortunately I didn’t see that one in theaters either). Say what you will about The Tree of Life, but the sound in that film was a monumental achievement in Sound Editing and Mixing. The fact that it wasn’t nominated for either of those Oscars goes down for me as some of the greatest Oscar travesties. The sound in To The Wonder was once again on a whole other level to what other films this year have presented. Hopefully the Academy can correct themselves and give some love to the marvelous sound in this film.

To The Wonder, while not for everyone certainly, is a very emotional journey through the very existence and purpose of love. Javier Bardem’s character gives a monologue towards the end of the film that powerfully explains all the mysteries and complications surrounding love, making this movie not a film to watch, but rather to experience.