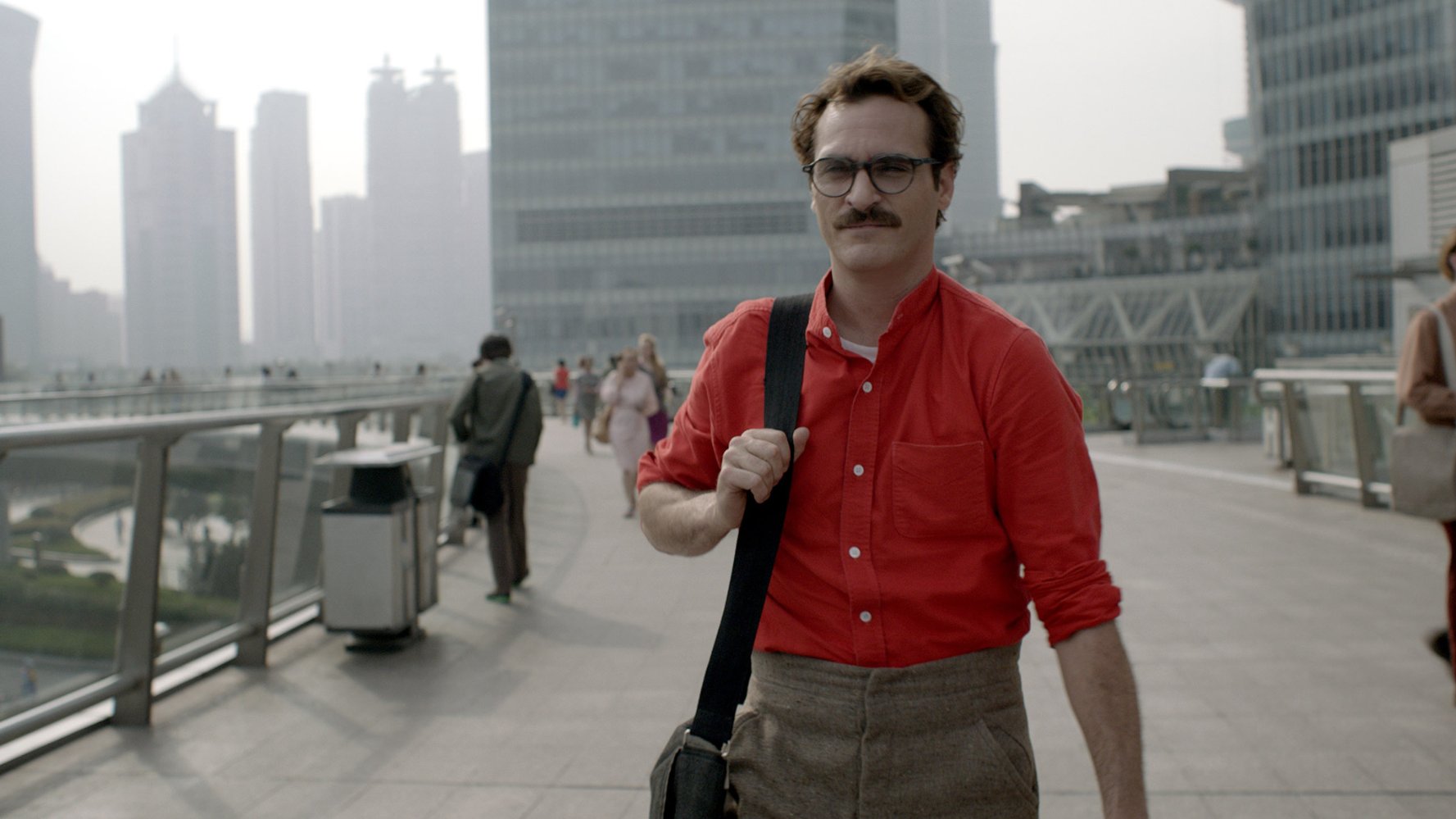 Perhaps the only thing I was regretting upon finally being able to see this film, is that I wouldn’t be able to watch the trailer for it in the theater anymore. One of my favorite experiences I’ve had at the theater this year is watching that trailer with an audience. They are going along with it and then Joaquin Pheonix’s Theodore Twombly tells his operating system “I wish I could touch you.” She replies: “How would you touch me?” And then the entire audience would get silent and you could feel the awkward, uncomfortable tension of the audience in the air. It was palpable, you could almost reach out and feel it.

Why do I reminisce on this? Because in just the trailer, Spike Jonze was able to convey even just a small amount of what “Her” is dealing with. He created an emotional entity that while you couldn’t touch it, couldn’t interact with it, it had its own presence that was felt by the audience. It felt “real”, though it wasn’t, right?…. Jonze wants us to dig deeper in our physical definitions of “real”.

The plot revolves around lonely Theodore Twombly, who works writing love letters for people in a future only a few steps away from our present. Going through a prolonged divorce with his ex-wife Catherine(Rooney Mara), he gets a brand new artificially intelligent operating system that results in Samantha, voiced by Scarlett Johannson. Theodore and Samantha slowly begin a romantic relationship, bringing up a multitude of interesting questions about love and relationships.

Spike Jonze and Director of Photography Hoyte Van Hoytema are a match made in cinema heaven. Both excel in portraying a heightened reality. Jonze with his journey through a portal into John Malkovich, and a childhood escape to an island populated with strange critters. Hoytema with “Let the Right One In” fills its frames with dread and anxiety, and his sleek aesthetics of “Tinker Tailor Soldier Spy” that paints equal parts nostalgia and anxiety. They are both masters of portraying a reality just a few paces away from our own. Hoytema accents each frame of “Her” with an untrustful warmth that is just the right balance between stylization and grounded realism, speaking visually to the audience that this is no ordinary love story. Even the flashback scenes with Catherine seem dreamy yet fragmented, complimenting Theodore’s mistrusted feelings toward her.

The amount of subtle world-building is no small feat. It’s in every frame. The buildings and offices seem neat and compact. The use of architecture in this film to convey emotion is stunning. The costumes combine the styles of our present with touches of Tarkovsky’s “Solaris”, adding the familiar and the futuristic together. When Theodore walks through the streets, everyone has earbuds in and is presumably talking to their own operating systems. Few person-to-person conversations are to be seen. This is all obviously an observation on the not-too-different state we live in now. But in true Baudrillardian sense, Jonze does not judge – he embraces.

A professor of mine often says: “All great science fiction is a response to the time period it was made in.” What does Jonze have to say about our social media and technology obsessed generation? That it’s not as bad as many want to think. That there is much value to be cherished, that there is potential in all this virtuality. This is perhaps the most strangely hopeful and optimistic view of the future seen in recent years. Even the company Theodore writes for, BeautifulHandwrittenLetters.com, could have easily been a smack in the face to bloggers, but Jonze presents it with its own warm, thoughtful validity and necessity not just in Theodore’s world, but maybe ours as well.

The acting in this film is without a misstep, and with all manner of mastery. This is acting at it’s most impressive and involving. Is Joaquin Pheonix the most engaging American actor right now? I think so. He captures all the facets of Theodore’s emotions. The timidity, the romance, the contempt and regret lies in every interaction the audience has with him. Scarlett Johannson gives a performance nothing short of landmark. The amount of soul, personality, complexity, nuance and authenticity she is able to convey through just her voice is what makes this movie work, and speaks directly to the idea Jonze is proposing in the film: Doesn’t the virtual have an identity and existence apart from that of the human? If the Academy isn’t willing to offer a nomination to Johannson for her work in this film, can it at least be time for a best voice-acting category? Amy Adams is absolutely marvelous as well. Playing the friend of Theodore, named Amy(coincidentally?), she creates a great source of validation and clarity for Theodore. She fills each scene with the sort of life and vibrance that Theodore seeks. Rooney Mara in a supporting role is able to convey all the lovely and unwelcoming aspects of Catherine, and mostly just visually without dialogue. Chris Pratt and Olivia Wilde both each provide small, but equally touching and comedic performances as well.

The score by Arcade Fire and Owen Pallet is touching. The notes they provide do well to accompany the spectrum of emotions at play. The loneliness, romance and regret that Theodore experiences is superbly complimented tonally by the score.

It’s interesting to note how Jonze frames the female characters identities to Theodore through their ability to speak. With Samantha, that is her only way to directly communicate herself to Theodore and others. While Theodore assigned her a female voice, it is Samantha that owns that voice. As the story progresses, she takes that voice and gives herself her own identity, not the one Theodore did. With Catherine, there is really only one scene in which she speaks. Every other one involves a dreamy flashback where music plays over her speaking, with the few audible lines from her being cutesy love dialogue. Perhaps this is how Theodore prefers to remember her, rather than the human and complex woman that sits before him as they have lunch together in the present. A scene involving a human sex surrogate for Theodore and Samantha adds to this observation as well. She only speaks when separated by some sort of door from Theodore, whether it be the bathroom door or the taxi cab door. I don’t think any of this is done by coincidence, but to touch on Theodore’s complicated perceptions of women, his own isolation and disconnect from others, and the role voice plays to give them reality – whether warm or harsh.

Theodore and Samantha have an intimate moment with each other at a point in the film. Jonze cleverly cuts to black, only allowing the audience to listen in on their moment. The reason why this works is because Jonze asks the audience the essential question of the film: You can’t see it, you can’t touch it, and you can only partially interact with the scene – But does that make it less real?