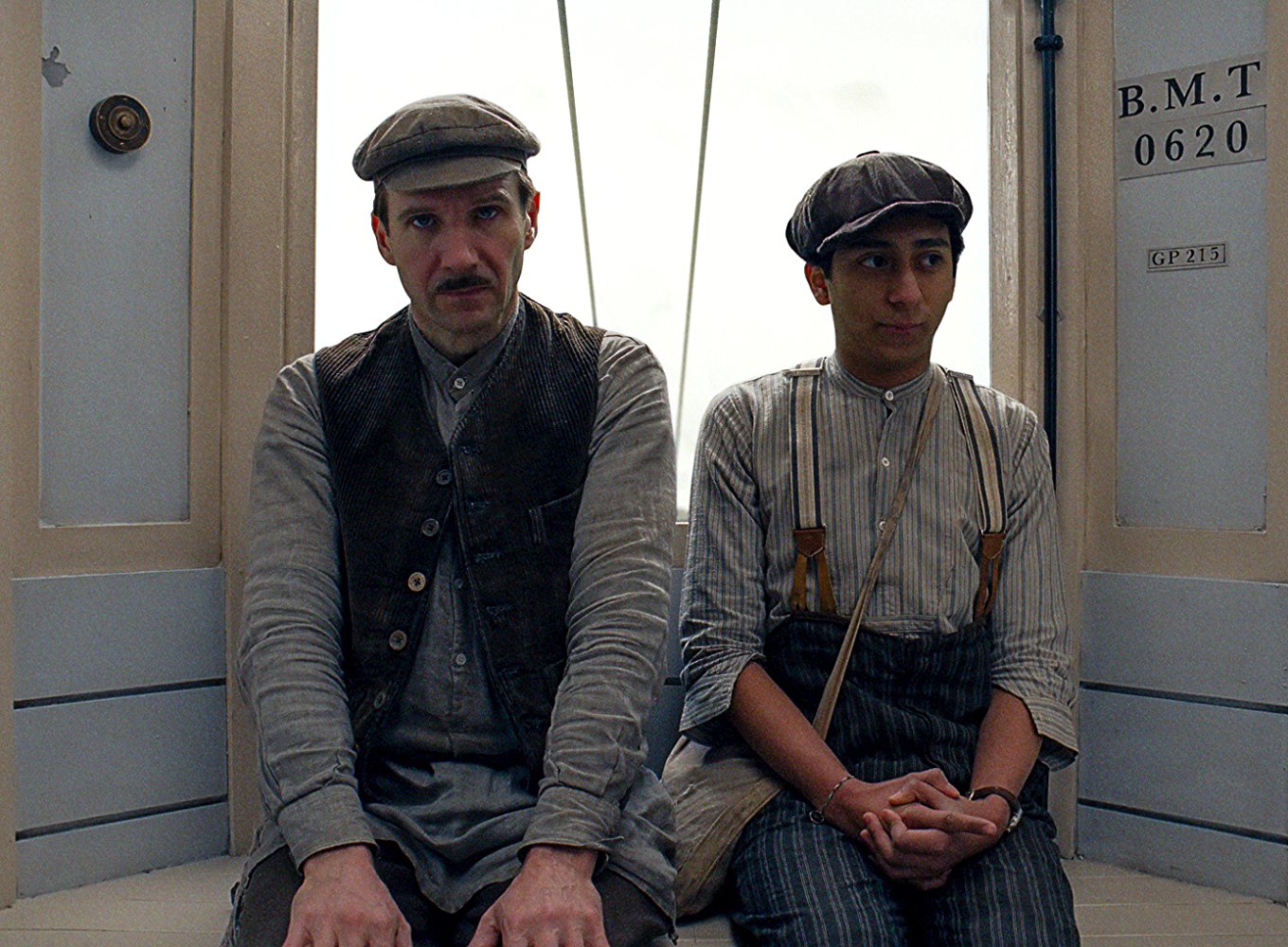 Wes Anderson is a very hard director to be on the fence about. As much as you can love him for his heightened realities of deadpan, his whimsical storytelling, precise camera movements and his perfectly framed centers, you could just as easily hate him for those same things. However, there’s something about this film that tells me it will win over even his most negative of critics.

The plot jumps through some timelines, beginning with an old author(Tom Wilkinson), who recalls his younger self(Jude Law) as he meets the older version of our protagonist Zero Moustafa(F. Murray Abraham) as he recalls his younger self(Tony Revolori) and his experiences in 1932 working as a Lobby Boy at The Grand Budapest Hotel under the larger than life head concierge M. Gustave(Ralph Fiennes). M. Gustave is renowned for his treatment of the guests at the hotel, especially the older blond women, whom he treats both professionally and sexually with the upmost care. When one of his closest relationships, the 84 year old Madame D., suspiciously dies, she names Gustave as the heir to a priceless painting of hers, “Boy with Apple”, angering her villainous son Dmitri(Adrien Brody) and his sociopathic henchman Jopling(Willem Dafoe). Gustave is framed for the murder, setting off a caper of sorts to find the painting and clear his name.

Ralph Fiennes gives perhaps one of his finest performances to date. You typically don’t think of him as a comedic actor, but here he is as perfect and precise in his delivery as Anderson is in his framing and editing. In the blink of an eye he’ll go from being the most polite person on the planet to letting loose a string of astonished profanity, but all with a certain air of sophistication retained within. Fiennes completely embraces the zaniness surrounding his character’s quirks and the setting of the film, but at the same time is able to ground his exuberance in an emotionally engaging enough reality for the audience to latch onto.

Tony Revolori is an outstanding discovery by Anderson, he seems almost tailor-made to Anderson’s aesthetics. As the young Zero, Revolori serves as an entertaining canvas for this wild story to be painted upon. Just as his character is under Gustave’s tutelage, he seems to be a muse in the making for Anderson. I certainly hope he isn’t a one-hit wonder, as I would love to see what happens when he stretches his acting wings further. Saoirse Ronan as Agatha, the love of Zero with a birthmark of Mexico on her cheek, is a wonder to watch. She embodies the purity and wonder of the time period Zero recounts. This time last year, she starred in The Host, one of the biggest disasters of that year. Let’s just say it’s good to have her back in more artistic fare. Adrien Brody and Willem Dafoe are delightfully evil as the story’s villains, both have portrayed slimy characters before, but they still find entertaining variations on the stereotypes here in this film.

The production design by Adam Stockhausen is perhaps the most detailed and elaborate in an Anderson film. The combination of his stop-motion constructed wide exteriors with the wild color palette throughout from Director of Photography Robert Yeoman compliments the heightened reality of this tale. Alexandre Desplat’s score encapsulates the zany antics of the film with the romantic nostalgia of the time period.

One thing has turned some off to Wes Anderson is that at times he can get so consumed in his own whimsical antics that it cuts off any real emotional attachment to the picture. That’s not the case here. You could say this is his most “adult” film to date. There’s certain sights here I was near-shocked to see in a film by Anderson, even though they are still executed in his unmistakable audience-winking auteuristic style. Even with all the signature comedy you find in Anderson’s films, there is still a certain sense of gravity and weight that surrounds the film. In some ways, the onset of war(it’s clear what historic foreign power is being referenced/satirized here) over this idyllic countryside is synonymous with how the emotional and dark moments seep into Gustave’s picture-perfect image of the Grand Budapest Hotel and his life. As much as this film is about looking back in nostalgia at an ideal time in life, it’s also about learning to cope with how those times are eventually corrupted. It’s about loving the life you’ve constructed for yourself, and being grateful for the great times while they lasted.