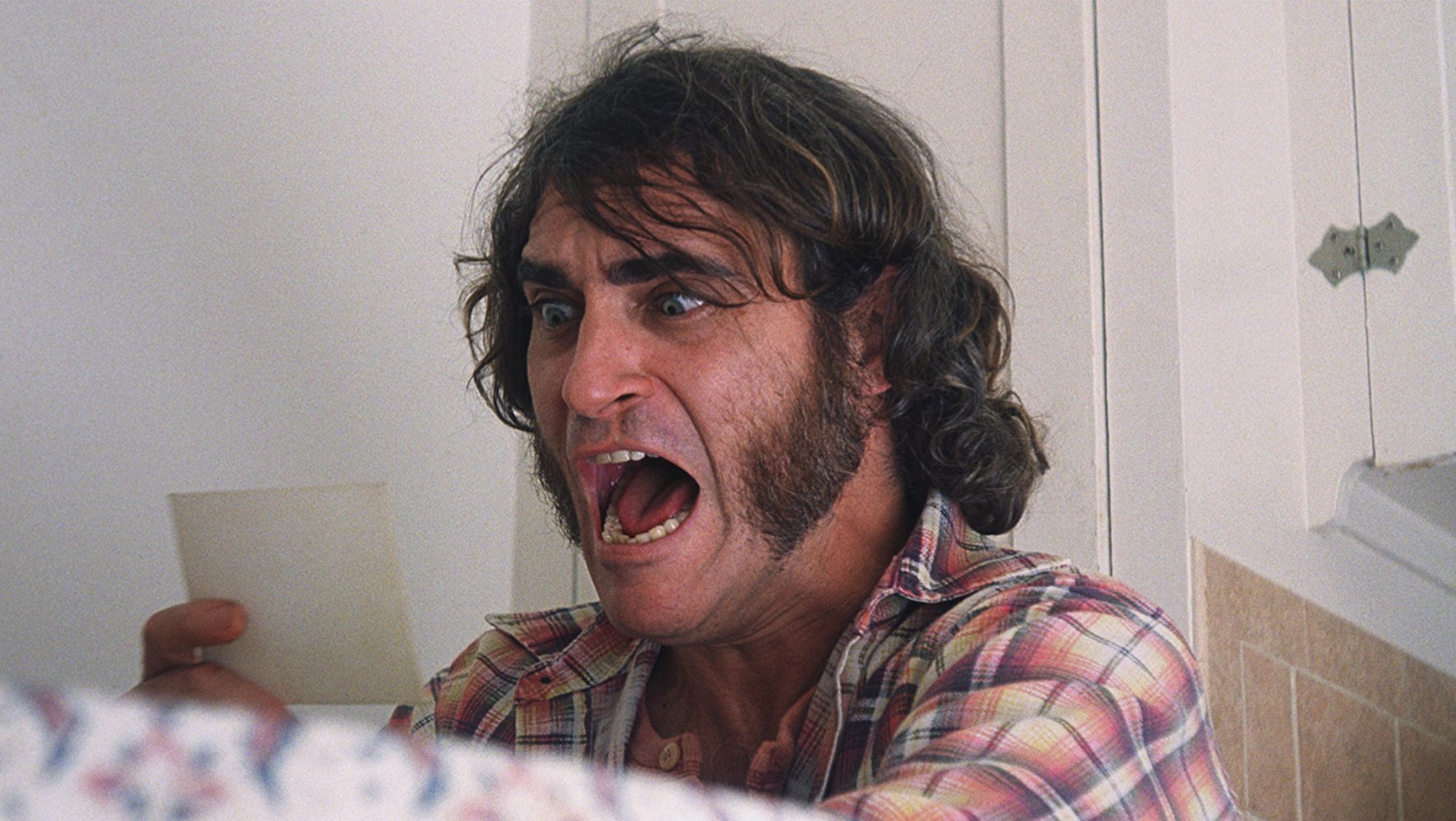 Inherent Vice is impossible to describe, and that’s part of its charm. Is it a psychedelic caper? A stoner noir? I honestly don’t know. When the credits rolled, my friend turned to me and asked, “How the hell did he get this made by a studio?”. The fact it got made the way it did is a feat unto itself. Eventually you clue into the fact that you’re not supposed to spend your time trying to keep up with the various conspiracies and contradictions thrown beach bum/stoner/private detective Larry “Doc” Sportello’s way – after all, not even Doc can keep up – and you just take a hit of what Paul Thomas Anderson has rolled for you and enjoy the trip.

Even if you weren’t familiar with Anderson’s work and trusted him walking in, he earns it quickly enough for you to release the reigns and take the trip with Doc. There’s a relaxed energy in the pacing of the film. Sportello frequently talks to a narrator (Joanna Newsom) that may or may not actually exist.  Each take is drawn out, some to impressive lengths, but the camera never seems to quite stop moving. It seems to get at the restlessness of 1970 Los Angeles – Vietnam is in full force, the Manson murders have put everyone on edge, and Nixon is President. Not that Anderson is spending much time on those events, that’s beside the point of this film. But you can feel the effects of it all in the restlessness and paranoia that pulsate through the film. And it shouldn’t be confused that this movie is a serious one especially, if anything it’s one of the funniest you’ll see this year. This movie reminds us of something that’s been largely absent from his work since 2002’s Punch-Drunk Love – The guy’s got a wonderful sense of humor and an unmatched skill in manifesting it on camera.

Joaquin Phoenix enjoyably mumbles and stumbles his way through the film. There’s a base line of haze and befuddlement he’s operating on. He’s wandering through a narrative that seems to elude him. With each end in the mystery tied up, several more come loose. He’s never had the opportunity for much comedy in the past, but proves a natural in the casual confusion with which he reacts to the events around him. Josh Brolin plays “Renaissance Cop” – he’s a detective and an actor – Christian F. “Bigfoot” Bjornsen like a time bomb with an identity crisis. He’s a sort of inversion to Sportello – hates hippies, clean-shaven, flattop haircut and despises everything that Doc revels in. You get the feeling he could implode at any moment. Some of the funniest moments of the film however come from just the way he eats certain things. Katherine Waterston as Shasta Fay Hepworth has an effective scene later in the film where all the easy going and carefree aspects of her persona come crashing down to reveal a person drowned in sorrow. It’s effective work, and you wish you could have seen more of it from the film.

The rest of the cast performs incredibly, with small roles coming from a talented and impressive ensemble that makes the most out of mostly limited screen time. Martin Short is delirious as a coked-up dentist. Hong Chau is a bolt of electricity as Chinese American confidante Jade. Martin Dew, Owen Wilson, Michael Kenneth Williams, Benicio Del Toro, Jena Malone, Reese Witherspoon, Jordan Christian Hearn and Eric Roberts round out expertly done supporting roles.

The cinematography by Robert Elswit matches the mindset of Doc. When he gets a load of conspiracy information from various characters the camera heightens Doc’s sense of paranoia and realization by slowly pushing the camera in. Jonny Greenwood’s score has a root in noir romanticism that turns into something much more ambient and eerie that only Greenwood could deliver. It captures the overall spirit of the film – free but crumbling.

It’s strange that a film that takes place in such a state of oncoming implosion of a way of life – Doc is clinging onto the last days of hippie ideals – can be this fun and hilarious, but that’s the achievement in Anderson’s latest work. It’s simultaneously cynical and hopeful. Bad times and end of days are inevitable, but that doesn’t mean that good times didn’t proceed it. And as the final shot occurs, it suggests that maybe good times can still be had.