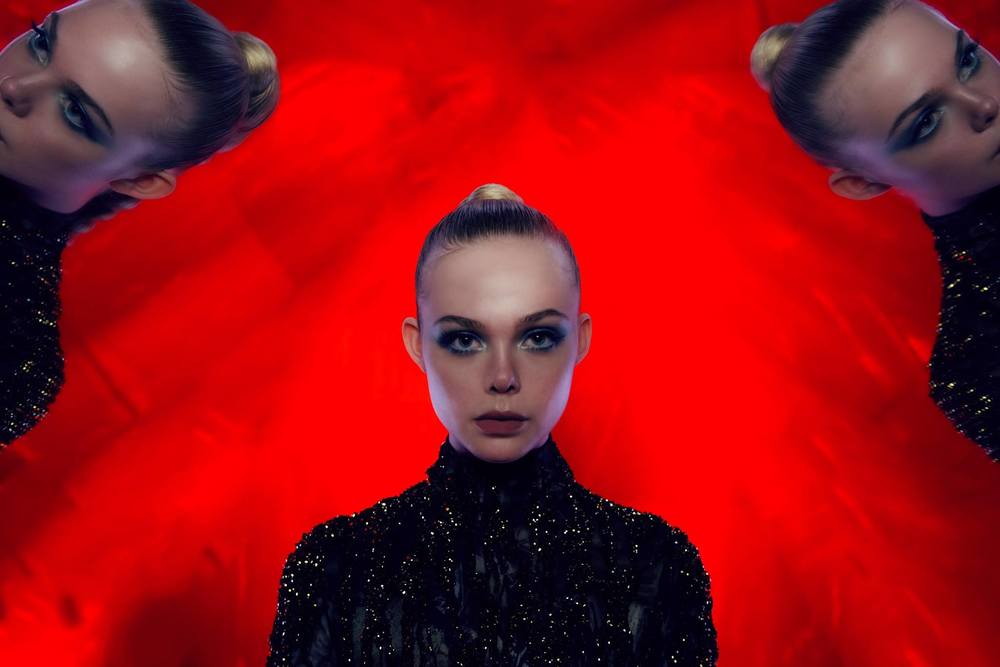 The Neon Demon may be the most self-descriptive film by Nicolas Winding Refn, in both form and content. Plus, the title itself is the most accurate description on Refn’s aesthetic I’ve ever heard. I wish I would have come up with the term. Refn has described himself as a pornographer, and he’s never been more right about that than with The Neon Demon. He films with a fervent obsession. Refn doesn’t work in storyline, he works in moods and feelings. He makes movies in the realm of the senses, not the plot.

The opening sequence tells us everything about The Neon Demon. Jesse (Elle Fanning), a young model who has just come to L.A. lies on a couch with her throat slit while a young man takes photos of her. When men are looking at her throughout the film, they do so predatorily. It starts with Dean (Karl Glusman), this young man photographing her. He stares through the camera like an evil entity, his eyes fixated on his prey. This idea is repeated with every male character. They see what they want to see in Jesse, how her beauty can be commodified and devoured for their purposes. As one character says in something resembling the film’s thesis, “Beauty isn’t everything. It’s the only thing.”

Beauty is in the eye of the beholder, sure, but it’s also in the beholden. Beauty is the primary trait of Jesse. She knows she’s beautiful, she knows it’s her ticket to fame and fortune. Elle Fanning has always been great in her young career, off to a deservedly excellent start. Yet here feels like her “star is born” moment, she’s a revelation as Jesse. She doesn’t let this one trait of beauty of her character define her, she defines it. She oscillates between stereotypes, between innocence – a deer in the headlights of Hollywood – and malevolence – a calculative temptress who knows how to manipulate those around her and spit them back out.

Keanu Reeves envelops reprehensibility as Hank, the manager at the seedy hotel Jesse is staying in. He’s a joy to witness in how awful he plays himself. The trio of beautiful young women (Jena Malone, Abbey Lee and Bella Heathcote) who want Jesse’s beauty are a magnetic combination of heightened camp and calculation. Alessandro Nivola is delightfully heightened to near-ridiculous antics. He channels Ernest Hemingway to almost hammy ends, representing the entitled half that run the fashion industry as a famed designer who selects Jesse to close out his fashion show. Christina Hendricks has but one scene, yet still makes a mark on your memory with how cold and dismissive, yet honest she is with such little dialogue.

Natasha Braier last lent her talents to shooting the bare landscapes and brutality of The Rover. Here she creates more stunning imagery, her compositions are perfect and enforce the feeling that Refn seeks to create. The camera wants to devour Jesse in even the film’s most benign situations, yet feels equally afraid of her. It’s a strange duality that Braier masters.

Refn has never had a better creative partner than Cliff Martinez and his scoring for his past 3 films. Martinez is as much a communicator of mood, feeling and content in Refn’s films as the cinematographer or writer. He helped create the impossibly cool feeling of Drive, the Wagnerian electronica of Only God Forgives, and here Martinez blends Carpenter horror influences with modern club mixes. It might be his best work.

The Neon Demon is marketed as somewhat of a horror film, but it’s far too alien to fit into any familiar sense of the genre. That’s not a dig, but at the same time it’s still far too alien to create a genre of its own. Refn is one of the last prominent experimental filmmakers. Only a filmmaker like Nicolas Winding Refn would find enough romance in a film with necrophilia to dedicate it to his wife. Jesse’s first runway experience plays not like a runway walk, but like a transformation and rebirth of self. It’s a trip down the rabbit hole of fame and beauty, perhaps the only indicator of what “the neon demon” is in this film. The big problem coming from critics in their reactions to this film is their desire to define and simplify what it all means. They shouldn’t. It’s okay to not understand, so long as you are impacted. The Neon Demon is a reminder that art doesn’t need an explanation to be affecting.