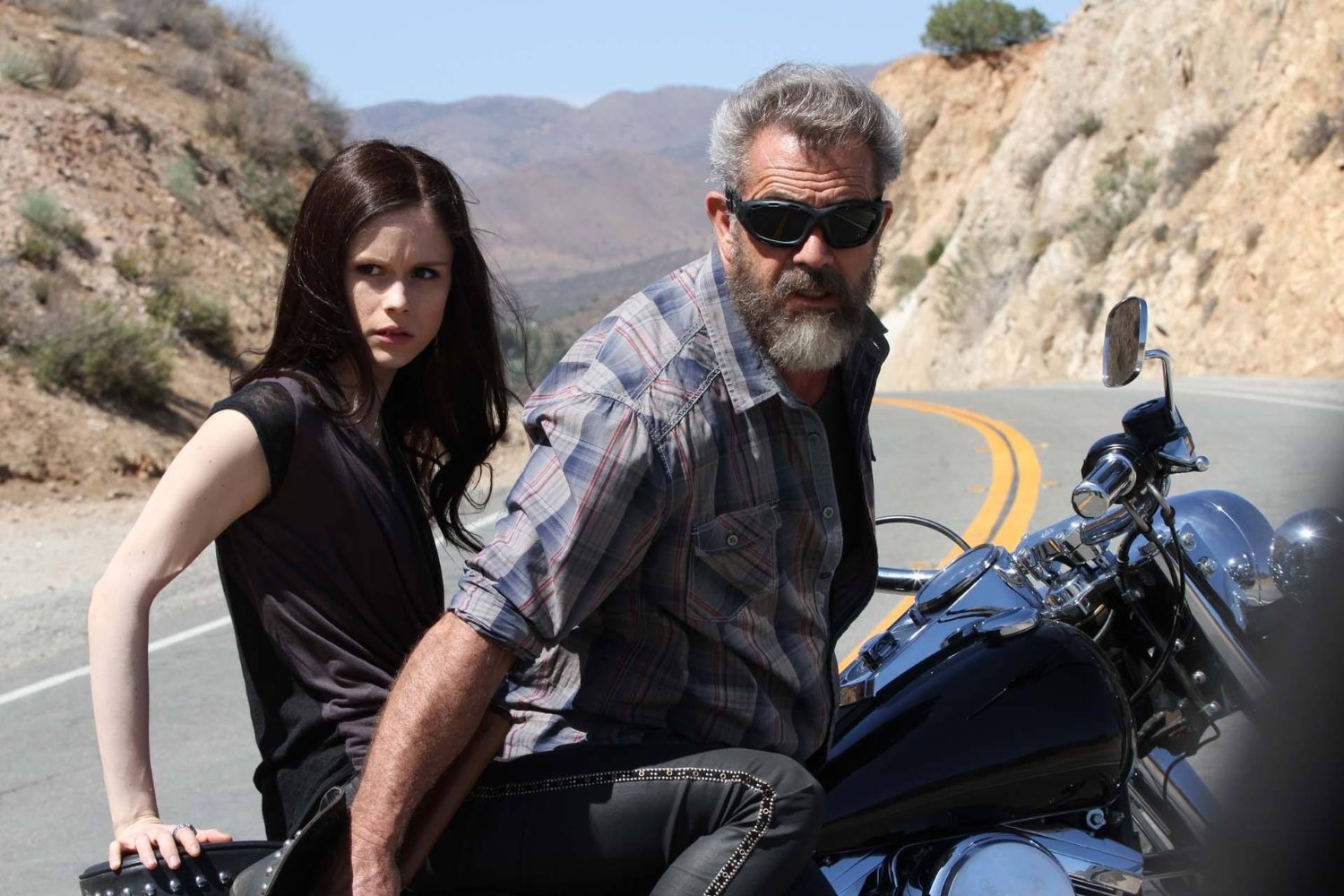 For a film that exists for the sole purpose of gleeful carnage and bloody shootouts, it’s curious that Blood Father begins with an intelligent scene that pleads for gun control. Lydia (Erin Moriarty) – who will later get into trouble after shooting and killing her cartel boyfriend, leading her on the run with her estranged, recovering alcoholic father John Link (Mel Gibson) – is checking out at a Walmart type store. She’s only buying two things – boxes upon boxes of pistol ammunition, and some bubble gum. She asks if she can get some cigarettes. The cashier asks her if she has an ID. “I need an ID to sell you cigarettes.” she enforces. Lydia doesn’t have one on her and passes, saying she’ll just get the ammunition and the bubble gum. I, nor I think anyone else, were expecting a movie like this to start with a scene as satirical and sobering as this, an anti-thesis to its own core purpose.

For a film with Mexicans as its antagonists, and a protagonist as intolerant as the guy playing him, it’s curious that it finds a way to be pro-immigration. Lydia and John hitch a ride in the back of a truck carrying illegal immigrants while they’re on the run, and John, being Mel Gibson, takes the opportunity to launch off some racist complaints about illegals taking our jobs. Lydia corrects him on his facts and history, and makes some jokes in Spanish about him to the immigrants. Any other film would have let John Link make the immigrants the butt of the joke in this scene, however in Blood Father Link is the butt.

Hey, I thought I was here for some mindless violence! Well yes, I got that, but also received more. What I’m getting at here is that Blood Father is strangely more poignant than the advertisements tell you. It is a film that both revels in its violence while also condemning it. This sort of schizophrenic tone shouldn’t work, it shouldn’t be able to have it both ways, but somehow it does here. It’s serious in the moments it needs to be, and giddily violent and fun where it counts. Director Jean-Francois Richet, helmer of the superb two-part Mesrine films and the perhaps underrated Assault on Precinct 13 remake, simply gets the job done here. There’s nothing too impressive in his direction, but there doesn’t need to be. What he does do is navigate the emotions of the film well enough to let it fall together and synthesize into something more unique than it would normally be.

Gibson is clinging on to a career at this point, launching his attempted comeback with directing duties on Hacksaw Ridge later this year, so in the meantime he’s stuck to B-level action fare like Blood Father and the also fun Get the Gringo. He’s slumming it in a film like this, at the bottom of the barrel from where he was even a decade ago. But what makes it work is that he plays the role that way. John Link has squandered away his life behind bars or beneath a bottle, burned every bridge he ever built and ended any good will he ever had towards him. Is there another more suited for this than Gibson? We get glimmering reminders of his manic lose-his-mind-at-any-moment presence and movie star magnetism that he exuded in the Lethal Weapon and Mad Max films during his prime. The dude can act, whether or not we’d like him to have that talent. Does he deserve forgiveness and redemption? What’s great is that in Blood Father he’s not asking for it.

Erin Moriarty showed off her dramatic chops in last year’s season of Jessica Jonesas well as previous positive turns in The Kings of Summer and True Detectiveseason one, and continues to prove her talent here. She elevates the underwritten role of Lydia, bringing believable emotion and tragedy to her scenes and giving her surrounding cast of industry veterans a run for their money. William H. Macy is reliable as ever, and Diego Luna is having a great time as the sleazy main villain. But it’s a surprise appearance from Michael Parks that gets the MVP performance, as a former criminal boss of Link’s that Link did time for. In a small number of scenes I only need 3-4 fingers for to count, he crafts a character that is authentically menacing and enjoyably hilarious. A highlight has him going on a “fuck millenials” rant in a moment of high tension that is too incredible to describe. He’s turned loose in Blood Father, and it’s fantastic.

Blood Father is a small gem of a film, a rare film filled with carnage and excessive violence that is also anti-violence. Had it simply been Mel Gibson killing the cartel, it would have succeeded on those terms. But Blood Father strives for a greater emotion and message and surprisingly achieves it. By the end of the film, having watched Link deliver vengeance is incredibly fun to watch, but it also communicates the essential question: What was all this mindless violence for? Did anything good come from it? Maybe I’m overthinking it, but I appreciate an action film that asks me to think as much as it asks me to turn my mind off.