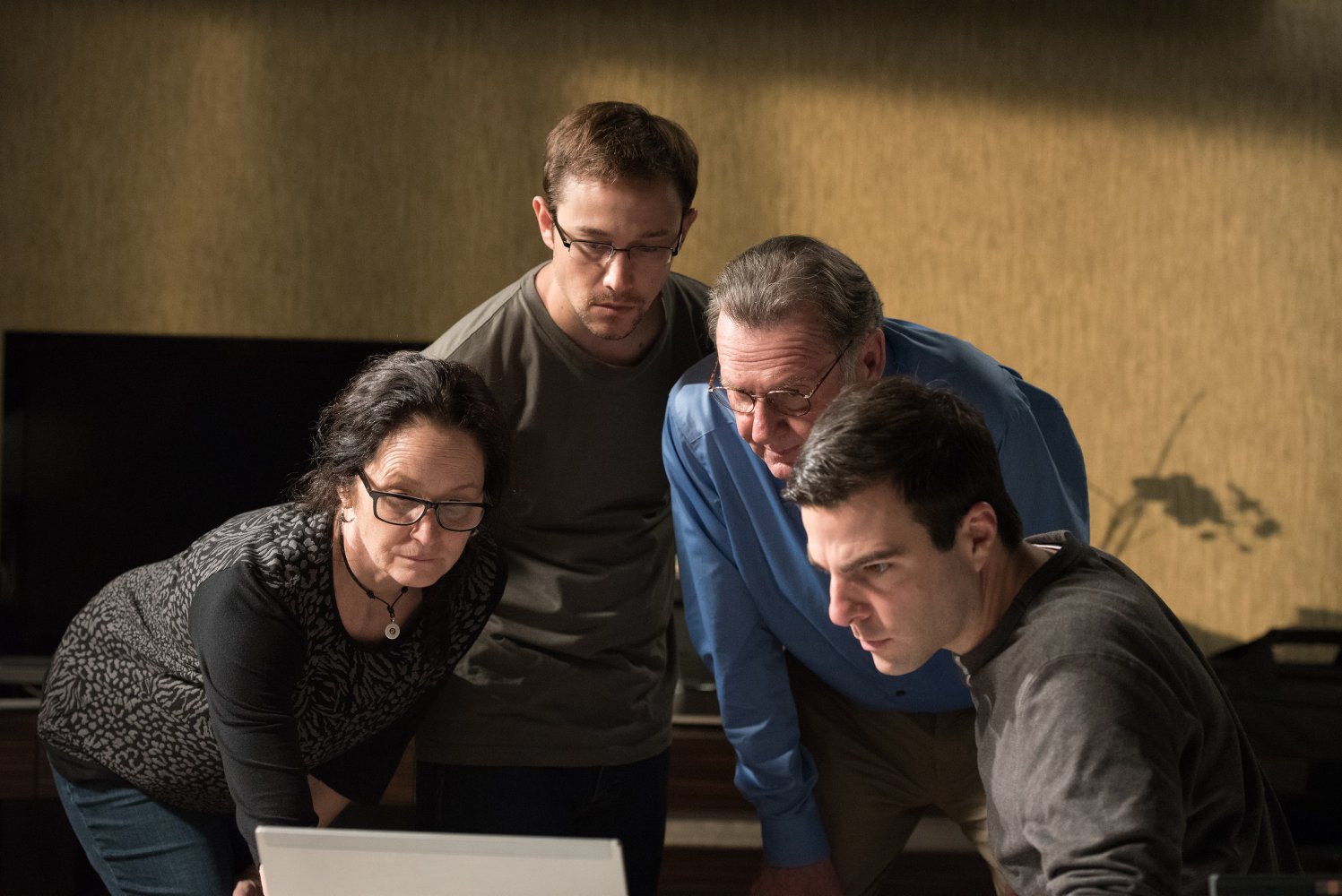 Oliver Stone is both the best and worst filmmaker to make a movie about Edward Snowden. He’s the best because Snowden is like an Oliver Stone wet dream manifested into a physical being, as Stone’s natural distrust of governments and institutions has powered some of his best films and goes right in line with Snowden. He’s also the worst though because he often allows his own personal opinions (like his last two decades of work) to derail the opportunity to make a compelling film with compelling characters. Unfortunately, we got the “worst filmmaker for this” option. Snowden suffers from the sad biopic trait of blind hero worship that always ruins films about even the most fascinating and controversial people.

Stone focuses on the least interesting aspects and events of Snowden’s life for a bulk of the film. A good two thirds of the film’s overlong 2+hour runtime is devoted to the romantic relationship between Snowden and his girlfriend Lindsey Mills (Shailene Woodley). They meet-cute over a dating website exclusively for geeks, and then they just keep being “adorkable” for two more hours. Nothing ever really comes of this, nothing that would unearth a new aspect or new information regarding Snowden and his motives. I can’t help but feel Woodley got mistreated with this role, as Stone gives her little to no material to work with. According to Stone, Lindsey’s only defining trait is that she’s a girl who likes photography and is endlessly supportive of Snowden no matter what. It approaches bizarre fantasy levels with how little Stone lets Lindsey have any impact on the story. It gets downright gratuitous when Stone films a sex scene that’s a few bass licks away from amateur porn as Stone oggles her body while keeping Gordon-Levitt covered up. If you’re going to spend this much time with their relationship, at least give your actress something to do with that time other than exist as set dressing.

Joseph Gordon-Levitt is as fine a choice as any to play the figure. He already looks passable enough as Snowden, having the same natural boyish and unintimidating physicality. Gordon-Levitt commits, getting down Snowden’s mannerisms and bizarre baritone. But at the same time, his attempts at doing Snowden’s voice prove more distracting than enlightening as you could always tell it was just an impression, it never really sunk in through the two-hour slog. For some reason, however unfairly, I think of The Social Network and how Fincher deliberately told Eisenberg not to try to do an impression of Mark Zuckerberg, but to approach the role as a character so the performance could stand on its own. The same principle could have been used here.

The cast is pretty star-studded and capable, though most don’t get much to do but spout exposition. Even if Rhys Ifans’ character Corbin O’Brien is nothing but an amalgation of villainous CIA heads that keeps waxing on the merits of constant surveillance, he at least makes it fun to watch as Ifans spews and hisses menacingly at Snowden. Timothy Olyphant has a brief role as a schmoozy CIA operative, and he’s always fun to watch be despicable. Melissa Leo, Zachary Quinto and Tom Wilkinson are nice bits of stunt casting as the trio of reporters that broke the story – Laura Poitras, Glenn Greenwald and Ewen MacAskill. Lakeith Stanfield is supremely underused as another analyst who’s sympathetic to Snowden’s journey. But honestly, like most films, it’s Nic Cage who’s the standout.

Nic Cage almost makes the film worth it just for his 3-5 minutes of screen time. In a movie about government secrets, national security and espionage, the most captivating moments are actually when Cage is on screen as a mentor of sorts to Snowden in his early days. Cage is no stranger to dialing it up, but he plays his scenes like he’s on the verge of having a god-damn stroke here. The way he can sell lines like “…finding the terrorist in the internet haystack” or “Well you’ve come to the right little whorehouse” while puffing on his cigarette like it’s an oxygen tube is transcendent. In a bizarre scene near the end, it cuts to him watching the television as Snowden’s identity as the man behind the leaks is revealed to the news. Cage, like he’s in a sports film watching his prodigy score the winning touchdown, huffs his cigarette and yells at some poor lady in his kitchen “He did it! The kid did it!” Cage’s role is a microcosm of just how magnetic an actor he is. He can elevate any material into, if not relevancy or pedigree, to at least engaging and enjoyable.

Cinematographer Anthony Dod Mantle’s hyper-active camera techniques are put to waste, as shots of Snowden meant to replicate surveillance cameras are either too scattered and unconstructed throughout the film to crescendo to an insight or feeling, or are too hammered in and unsubtle to let you find the meaning. Perhaps the most disappointing thing about Snowden is that anyone who has even a tertiary knowledge of Snowden –  “Oh yeah that guy that leaked the surveillance documents?” – won’t learn anything new from this film. The only new piece of information I got was that he had epilepsy, which even then Stone doesn’t use to make Snowden any more interesting. Stone does a miserable job of communicating the specifics of the information in the leaked documents, or how Snowden and others acquire this information. What is this, and why does it matter? Easily answered questions Stone failed to ask and answer. Plenty of other films have succeeded at skipping out on the science and specifics, but it’s worked for them because they put in the groundwork with character and story that an audience can grab onto.

The hero worship goes over the top in the final few minutes, as the camera goes behind the laptop Snowden is skyping from to reveal…the ACTUAL Edward Snowden! It goes from hero worship to god-damn eye-rolling propaganda as actual Edward Snowden finishes his lecture. Then to make it worse, the most unsubtle anthem about Snowden starts playing over the end credits, and of course it’s performed by Peter Gabriel. It’s gone past parody at this point and shot straight to fever dream. I’ve never asked this about a film before, but has there ever been a pro-subject biopic that the subject should feel embarrassed by before?

If anything, Snowden is a reassurance of how well-done Laura Poitras’ documentary Citizenfour (chronicling her time with Snowden and his impact) is. Just go watch that. It does every single thing better than Snowden. It captures the paranoia so well, it can communicate the tech jargon and facts to its audience, and Poitras has a clarity and focus in her documentary that is absent from Stone’s shouty, aloof structure. She, even though she has the right to more than any other filmmaker because of her relationship to Snowden, doesn’t ever use her film for hero worship. There’s a conversation about what freedom means and what security means and how those two terms intersect with surveillance in her film. In Snowden it’s nothing but Stone yelling at a cloud about how rock hard he is for Edward Snowden. If you’re at all interested in Edward Snowden, just go watch her film.