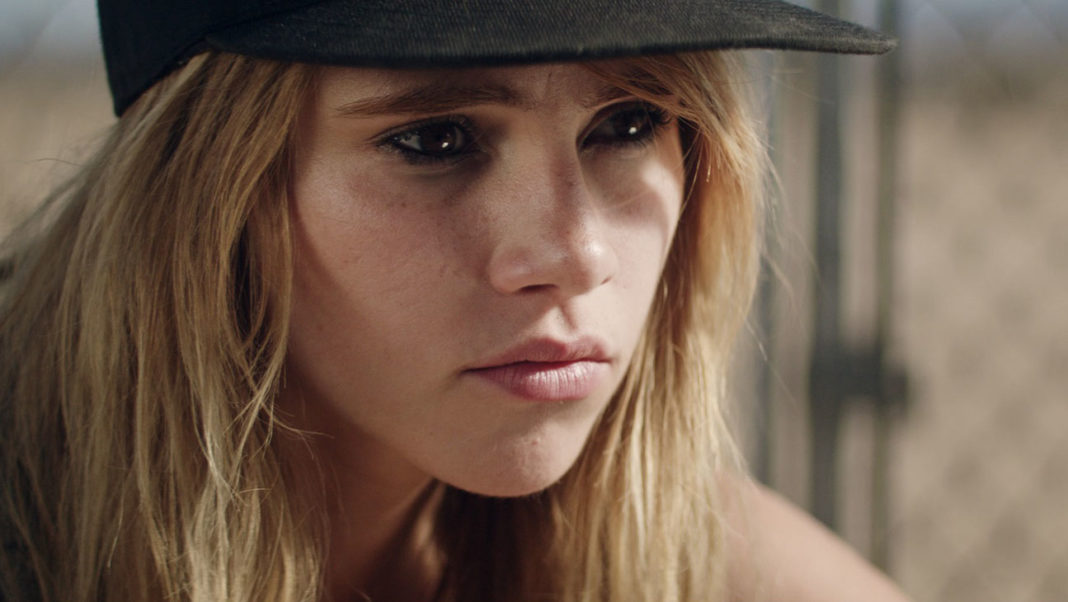 Ana Lily Amirpour burst onto the scene 3 years ago with her wonderfully mystifying and original A Girl Walks Home Alone at Night, immediately marking her as a director to watch. It had so much going on in it, it was a vampire movie, a meditation on relationships and a surprisingly sweet romance that somehow all melded together into something you couldn’t ignore or write off. It’s the sort of film you can’t accurately describe, you just have to see it to understand.  We’ve finally gotten her followup, The Bad Batch, which is another film that can’t be accurately described, you just have to see it to understand. It’s got some significant flaws to it, but they don’t drown out the sheer creativity and excitement of a filmmaker like Amirpour.

Arlen (Suki Waterhouse) is an outcast from society, where they send all undesirables to a stretch of desert somewhere near Texas. After escaping from a group of cannibals that have taken her right arm and leg, she ends up in a community called Comfort, run by an enigmatic figure referred to as The Dream (Keanu Reeves). She ends up helping a cannibal the script calls Miami Man (Jason Momoa) find his daughter as a romance develops between them.

Suki Waterhouse shows a lot of promise here. She doesn’t speak a word for the first 20 minutes, and doesn’t speak a whole lot after that, but you’re still with her the whole way. You can intuit what she’s thinking and why she’s doing what she’s doing. Jason Momoa dons a hispanic accent so out of place and exaggerated, but it’s not my place to decide if that’s something to get offended about or not. He’s plenty charismatic, and it’s nice to see a role for him that isn’t wholly dependent on his hulking size and feeling that he could bench press a truck. Those aspects are certainly there, but they aren’t the main point of Momoa being here. He doesn’t speak much in this role either – come to think of it the whole film is impressively minimal on dialogue – but he doesn’t have to in order to tell you what he’s thinking.

There’s a lot of fun, smaller turns by an exciting cast. Giovanni Ribisi does one of the most accurate portrayals I’ve seen of a homeless person that’s lost their mind, he understands it’s not funny, it’s just tragic. Diego Luna is here in a small role where you have to squint to realize it’s him. Jim Carrey is in this, which surprisingly the advertisements of this film don’t want you to know that, but he does an impressive job as a benevolent mute drifter that continually crosses paths with Arlen and Miami Man. Then there’s Keanu Reeves, a favorite of mine, in a delightful role as The Dream, the man that runs the safe haven called Comfort. He dons a ridiculous mustache and is the right choice for The Dream, he already has this sort of mysterious, magnetic quality to him that doesn’t seem to adhere to the human nature the rest of us are subjected to. He only has a handful of scenes, but he commands each of them, giving an impassioned speech about the relationship between shitting and his posterity in one instance. If that doesn’t do anything for you, I don’t know what to tell you.

One thing that it’s clear Amirpour does really well after these two films, is that she creates whole new worlds off the strength of nothing but characters. That’s a whole lot harder to do well than it sounds. She’s worked with extremely limited budgets and managed to create striking settings without the traditional expository methods – the bulk of it rests on how these characters interact with each other. There are so many weird little aspects of the film that add up to an engrossing whole. Miami Man’s group of cannibals is populated with bodybuilders, and he drinks a soda called Jizzy Fizz. Ace of Base is being blasted by cannibals as they hack apart Arlen. Arlen wears yellow denim booty shorts with a winking face on the left cheek. The Dream is like a kinder Immortan Joe, he has a coven of pregnant wives with machine guns and he throws raves frequently.

There’s a surprising amount of negativity directed towards the film from a lot of critics I’m seeing. There are certainly flaws in The Bad Batch. The film feels like it’s a good 20 minutes too long, there are multiple passages that feel aimless in a way that doesn’t help the film’s identity. There’s one sequence where Arlen is tripping on ecstasy and ends up walking through the desert, and the visual part of it is pretty intriguing, but the part that makes it feel like it’s never going to end is that we hear her thoughts in an irritating echoed voiceover. It’s one of those sequences where you’re constantly wondering how long you’ve been watching it.

We can sit around and pick apart the film all we want, but that just feels counter-intuitive here. This is only Amirpour’s second feature, she’s more than allowed to have growing pains at this stage. Make no mistake, this is wholly Amirpour’s film. What would you rather have, an auteur stumble in making something original, or another filmmaker making cut and paste, derivative mistakes? I’d rather have a film with mistakes made by creativity than mistakes made by indecision and studio interference. Amirpour’s got so much potential and such a long and exciting career ahead of her. I just don’t see the reason to write her off already just because her second film wasn’t as well constructed as her first. Even at it’s worst, The Bad Batch is too weird and off in it’s own world and set of rules that you can’t just shrug it off. Also, just throwing this in here, they played a short film of Amirpour’s before the feature, and I’d like to see more distributors do that sort of thing.