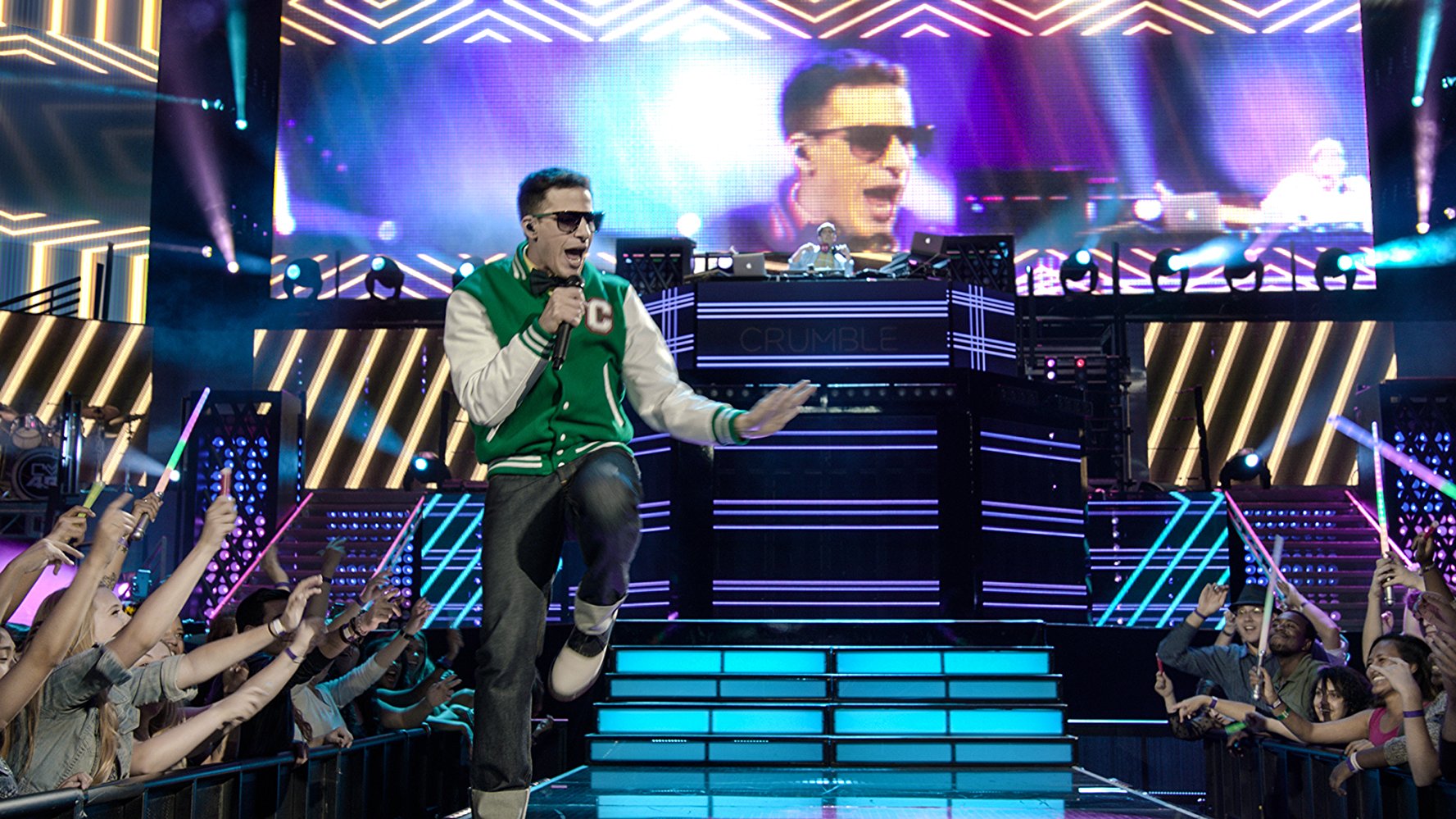 When I was writing for other sites, one of my favorite columns to write was “We Failed This Film”, where I highlighted underrated films that didn’t connect on release for whatever reason. I originally covered 24 different wonderful films for another site before I left it. Those can be read here if you like.

Although I covered a lot of films, there were always more films I planned on writing about for that column. But it took me a long time to return to this because I had the same fears most should have upon continuing something they laid to rest. I worried that it would be like a sequel that’s not as good as the original and just ends up tainting the memory of its predecessor. I had to be sure I still had more to say about these films. I’m sure now, and I’m incredibly happy to bring back one of the works I’m proudest of: We Failed This Film. Please enjoy, and thank you.

How We Failed It

Popstar is a mockumentary drawing from all sorts of real life boy band and popstar narratives in pop culture for parody. Conner (Andy Samberg) is the world’s biggest musician after leaving his boy band Style Boyz and going solo as Conner4Real while keeping Style Boyz member Owen (Jorma Taccone) on as his unnecessary stage DJ. His latest overproduced and overloaded album, Connquest, has tanked both commercially and critically. To rejuvenate his flailing tour, he hires a Tyler, The Creator-esque rapper Hunter the Hungry (Chris Redd) to open his show and turns to all sorts of on-stage gimmickry. However, the one thing that may give him redemption is to reunite his old boy band and settle his grudge with 3rd Style Boyz member Lawrence (Akiva Schaffer). 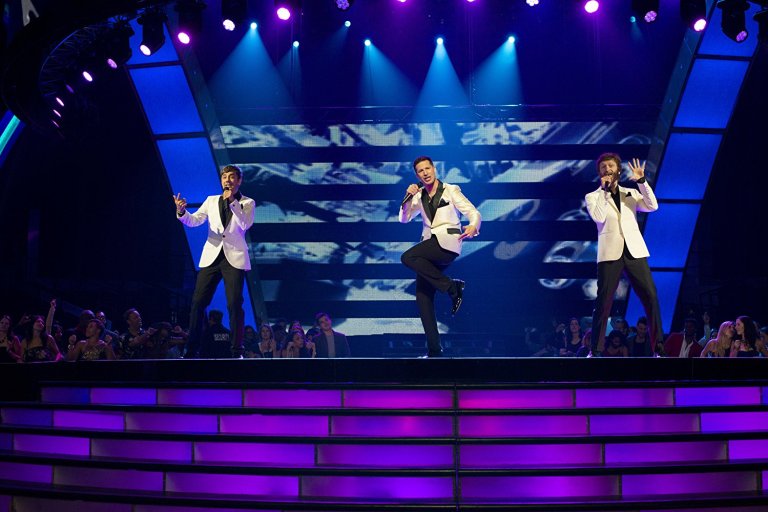 The film had a rough go at the box office, audiences just did not show up for the film despite extensive promotion and and a wide release from Universal. The film only grossed $4.6 million on its opening weekend, and would only end up at $9 million domestically against its $20 million budget. It’s strange there wasn’t a foreign release at all, it could have helped to up the amount the film took in, there was just a domestic release. This failure felt almost predestined, as Taccone and Schaffer’s previous efforts had busted at the box office despite how good the films were. Taccone’s MacGruber – again, the hardest I’ve ever laughed in a theater (covered previously here) – grossed only $9.3 million against its $10 million budget. Schaffer’s Hot Rod – which would become a cult classic – only nabbed $14.3 million against a $25 million budget and his next film The Watch just hit even with its budget of $68 million in a worldwide gross. Breaking even was the most success either of them had ever had at the box office. Their history didn’t bode well for Popstar, and whatever box office curse they have continued with Popstar’s release.

The critical response to the film wasn’t terrible, but it wasn’t that good either, there was almost a lack of response to the film. I’ve read A.O. Scott’s review 3 times in a row and I still can’t tell if he liked the movie or not, he just summarized the plot. Mark Kermode more or less appreciated the film, saying “It did pass the 6-laugh test, but only just.” Glenn Kenny was split down the middle, writing “It’s pretty much the same scenario as the aforementioned This is Spinal Tap, with different structural stresses. That is, the “band” in this movie breaks up pretty early on, but the quixotic nature of Conner’s, um, new direction is so plain that certain inevitable scenes feel more inevitable than actually earned, which was never a problem with This is Spinal Tap. And there are peaks and valleys to the movie that are too noticeable. The movie’s a tidy 90 minutes or so, but it starts to sag at the hour-mark and doesn’t get its oomph back for a while. All that said, though, what’s good about this movie is funny, and refreshing, enough to make the dry spots feel more tolerable in retrospect. I’m already hoping for a lot of deleted scenes on the Blu-ray release.”

Critics are afraid to love comedies the same way they love arthouse films, because they are considered less than other genres of film. To be fair, yes, a film like Superbad probably didn’t require the same filmmaking expertise to make as much as say There Will Be Blood, but that doesn’t mean we should just write off a film like Superbad. Superbad is hilarious and heartfelt and succeeds on its own terms. That’s what’s missing from critics and their takes on comedies, they often halt at asking if the film succeeds on its own terms or not. And that is what’s lacking from the critical response to this film, they only wanted to compare it to This is Spinal Tap, which any 9th grader into film can do, rather than ask if the film succeeds on its own terms.

There’s an autobiographical feel to the dynamic of the Style Boyz that makes their chemistry feel authentic. Owen does the beats, Lawrence writes the lyrics, and Conner is the frontman star. This assignment of roles is not far off from actuality of this trio, who go by The Lonely Island when working together, doing many hit SNL sketches in their time as a fake boy band. Taccone and Schaffer focus more on the writing and directing of their work, while Samberg is the clear star in front of the camera. They can all appreciate each other’s strengths and successes and it allows them to work together so well like they do here. It makes the film’s emotional anchor about friendship stick.

Taccone and Schaffer have both helmed cult classics on their own – Taccone with MacGruber, and Schaffer with Hot Rod – and their powers combined mesh really well for maximum hilarity. They expertly riff on the likes of U2, Macklemore, Bieber and other popstar/boy band narratives in a fresh manner. They build each scene starting in a sort of grounded reality for the film, and then just get continuously more zany with each second. For example, one scene Conner and his manager ask them to turn to the cameras off, but they leave the audio on while Conner complains about album sales – when all of the sudden they’re attacked by a horde of bees they have to fight off in an epic battle with a flamethrower, but we don’t get to see any of it because the cameras were off. They will also pepper in these random references to films that only cinephiles will find hilarious, and let me tell you it paid off for me. There’s a part where Owen’s headpiece makes the sound that the alien tripods make in Spielberg’s War of the Worlds, and Bill Hader’s roadie character mentions that Jan De Bont shot Flatliners, which had me near tears that they made that reference. There’s also quick instances of sobering social commentary that they work in. In one scene, while Conner and others discuss him ending up naked onstage, in the background on a monitor the news plays with terrifying headlines about environmental upheaval and political turmoil that mirror where we are now. Real problems are happening on a global scale, but here we are concerned with the fact that a popstar was accidentally naked on stage. 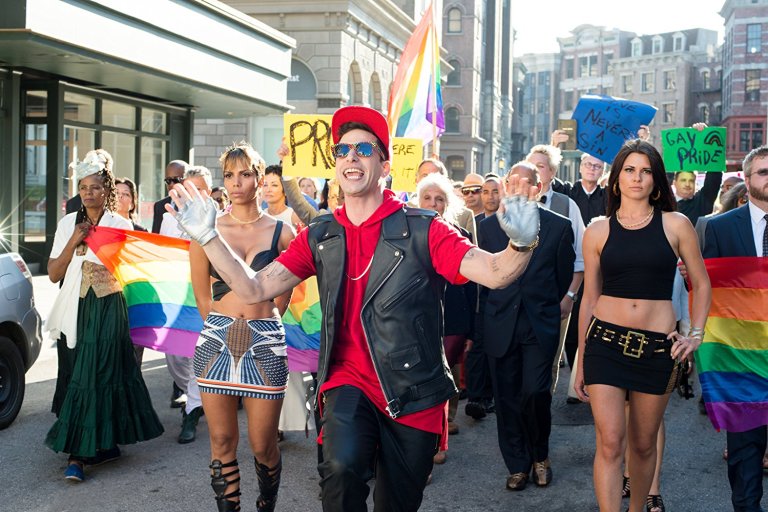 Brandon Trost is one of the most criminally undervalued cinematographers working, and his mastery of mimicry here is essential to making the film work. He makes each shot feel authentic in its documentary roots – via cellphone footage, behind the scenes work, concert and music video footage –  while pointing out the similar bland look that all these popstar documentaries have now. This film’s aesthetic doesn’t work for a second without him.

It also helps that everyone in the film, in cameos large and small, is contributing to the heightened “maximum comedic effect at all times” aesthetic of Taccone and Schaffer. Maya Rudolph gives an MVP performance in one scene as a corporate who has the most hilarious line reading of the N-Word I’ve perhaps ever heard. You don’t know where any scene will go when Chris Redd plays Hunter, and it’s exciting. Tim Meadows yelling “Young Blood!” angrily is comedic in ways I couldn’t anticipate. Secret 4th member of The Lonely Island, Justin Timberlake makes a great small appearance as Conner’s tour chef. There’s a running TMZ gag called CMZ including Eric Andre, who has a direct line to my funny bone, that gets more and more ridiculous as it goes on in ways I can’t accurately describe. I’ve included the clips below.

The songs are actually really good, they actually sound like they could be on the radio right now they’re produced so well. They’re earworms that stay stuck in your head long after the film. But what makes them special is how hilarious they are, they start off in a particular familiar niche and then just devolve into madness. For example, Conner writes an offensive gay rights song called “Equal Rights” where the whole point is to keep reminding us he’s not actually gay. To cap it off, Ringo Starr points out gay marriage is legal now, so why is Conner singing about it like it’s not? He also writes a song called “Finest Girl” where he relates lovemaking to the raid and assassination of Osama Bin Laden. This is far from an Oscar film, but the Oscars would have been a lot more fun if they had given a best original song nod to this film and had the Style Boyz perform a hit.

The Spinal Tap comparisons aren’t without merit, but critics rely on them too much instead of discussing the current film at hand. This has happened many times before recently – critics drowned Ain’t Them Bodies Saints in comparisons to Badlands, and smothered Out of the Furnace with The Deer Hunter comparisons (both Saints and Furnace were covered in the original run of We Failed this Film). At a certain point, you’re not talking about the current film, you’re just trying to show how much you know about the former. It’s a disservice to both films to only try and compare them. The key thing that sets Popstar apart from its predecessors is that there’s an actual plot and emotional throughline. Aside from being a laugh-a-minute exercise, it’s an ode to friendship. Friends can succeed on their own as long as they remain friends. RZA can release his own albums, but he’s still a part of the Wu-Tang Clan. Taccone and Schaffer have yet to find box office success, but they’ve made me laugh really hard along the way. I hope they never stop.