One of my favorite things about Tom Cruise is that he’s insane. Insane in the way that he is totally willing to dedicate himself without question to the requirements of ridiculously difficult and strenuous stunt work in his films. One thing that will always set Cruise apart from nearly everyone else in his field is that whatever you’re watching his character do on screen, you can watch it with the confidence that it’s him doing it, there’s no stunt double or green screen. He’s one of the only movie stars you can trust that way. Tom Cruise is scaling the Burj Khalifa? That’s really Tom Cruise actually doing that. Tom Cruise is hanging off the side of a plane while it takes off? That’s really Tom Cruise actually doing that.

There’s a part in the new film, Fallout, where Tom Cruise flies a helicopter and does these ridiculous turns and dives, and here’s the thing, it’s actually him flying the helicopter. He read the script and just went “guess I gotta learn how to fly a helicopter expertly enough to do these stunts” and that’s insane. Tom Cruise is 56 years old and learned an incredibly hard new hobby just so we could have fun watching a movie. Meanwhile, I am 26 years old and earlier this week I sweated through 3 different shirts in one day just by existing.

There’s a part in Fallout where Tom Cruise does a HALO (High Altitude, Low Opening) jump, which is some navy seal shit. And he actually did it. No CG, no green screen, just a dude jumping out of a plane from really high up. He trained for 6 months in order to do just one stunt. That’s ridiculous dedication. He is 56 years old and risking his life on film for our entertainment and the purity of cinema. Meanwhile, I am 26 years old and a few days ago my back hurt because I got out of bed wrong.

3. Hanging Off a Plane

In the opening scene of the 5th film, Rogue Nation, there’s a part where Tom Cruise needs to get on this plane that’s taking off so he jumps onto the side of the plane, hanging on a door and holds on as it takes off. One of my favorite things to do when that trailer came out and featured that sequence, was to show it to people and watch their faces when I told them that there was no green screen in that shot. They actually strapped Tom Cruise to a plane and said “good luck” and filmed it in a single take. Tom Cruise was 53 years old when Rogue Nation came out and was hanging off the side of a plane while it took off just to please us. Meanwhile, I am 26 years old and I only came close to vomiting and passing out 3 times on my last jog. 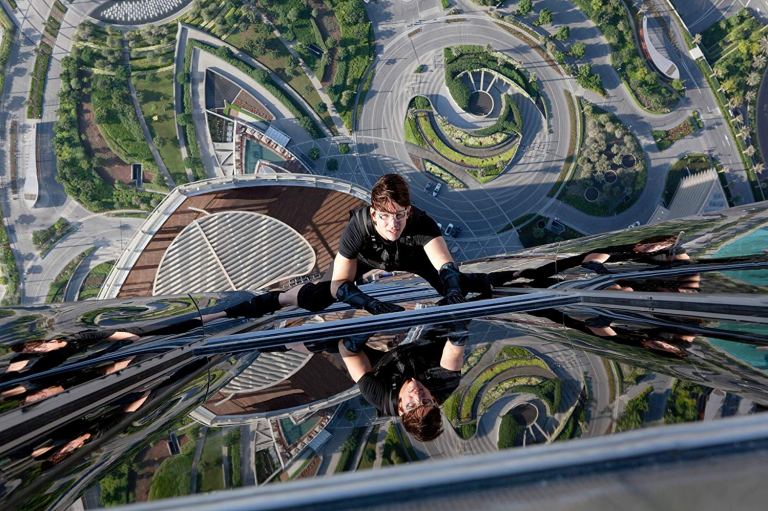 In the fourth film’s (Ghost Protocol) greatest sequence among multiple impressive ones, there is a part where Tom Cruise’s Ethan Hunt, in an ever-increasingly dangerous setup, has to scale part of the Burj Khalifa (the world’s tallest building) to get into the control room for what they need to do. In any other film fronted by any other actor, they would have built a Burj Khalifa set with green screen backgrounds to do the climbing in a safe, controlled environment. Not Tom Cruise though, they went right to the Burj Khalifa and just straight up strapped him to the building and let him loose. It pays off, the sequence is an all-timer because what you’re watching Cruise do is real. That’s really him climbing the building. Tom Cruise was 49 years old when Ghost Protocol came out. He was 49 years old and climbing the tallest building in the world just for our entertainment. Meanwhile, I am 26 years old and last week when I went to group therapy there were free donuts in the lobby but I ate too many and ended up vomiting a little inside my mouth.

So there’s a part in Fallout where Cruise jumps across a gap and hits the ledge chest first. Now I know what you’re thinking, jumping gaps are a dime a dozen these days, but the jump itself isn’t the impressive part, it’s what happened during it and after. When they filmed the jump he put his foot out against the building to soften the landing but instead ended up breaking his ankle right there and then. I don’t know what you would have done, but Tom Cruise just winced a little, got up and hobbled out of frame to finish the take. That’s insane. The normal human thing to do would probably just lay down and die right in that instant, that’s what I would have done, but not Tom Cruise. His first instinct was not to go “ouch” like any mortal human would, but instead to go “gotta finish this take” – that’s psychotic and amazing. Tom Cruise is 56 years old, breaking his ankles and just shrugging it off for the sanctity of film. Meanwhile, I am 26 and one time I accidentally pinched a nut when I sat down and had to go lay down for an hour.