I don’t know how to start this, other than I have obviously recently watched the Exorcist sequels for the first time. I’ve become a fan of all things Exorcist ever since watching the TV show (RIP, renew it you cowards) and falling in love with it. But since it’s gone, I need my gonzo horror fix elsewhere, so I decided to watch the sequels to the original film. And hey, I really like them. You have to watch them with the expectation that of course they’re not going to be as masterful or groundbreaking as the William Friedkin original. But that’s not the point of the sequels. They aren’t trying to be the original, so don’t fault them for something they’re not aiming for. They’re just trying to be weird works of art, and they succeed at that.

After William Friedkin decided to not return for a sequel, Deliverance director John Boorman stepped into the director’s chair for The Exorcist II: The Heretic. Set 4 years after the original, it follows a psychiatrist (Louise Fletcher) and a priest from the Vatican (Richard Burton) investigating the death of Father Merrin teaming up to save Regan (Linda Blair) once again from the clutches of Pazuzu. The Heretic had been built up for me as one of the worst films ever made, but here’s the thing: it’s really not. It’s actually really good. The cinematography from William A. Fraker is just wondrous. This is the guy who shot Bullitt and Rosemary’s Baby, so you know you’re in for the goods. Heretic contains some of the most beautiful and haunting shots in the franchise. Consider the shot of a young lady lighting herself on fire and then holding her arms out like a Christ figure. Consider the lighting in the psychiatrist offices, shadowy and unsettling. For a film that’s supposed to suck, it’s shot extremely well. It’s also got a stacked cast with Richard Burton, Louise Fletcher, James Earl Jones, and even Ned Beatty for a quick minute alongside Linda Blair and Max Von Sydow reprising their original roles. 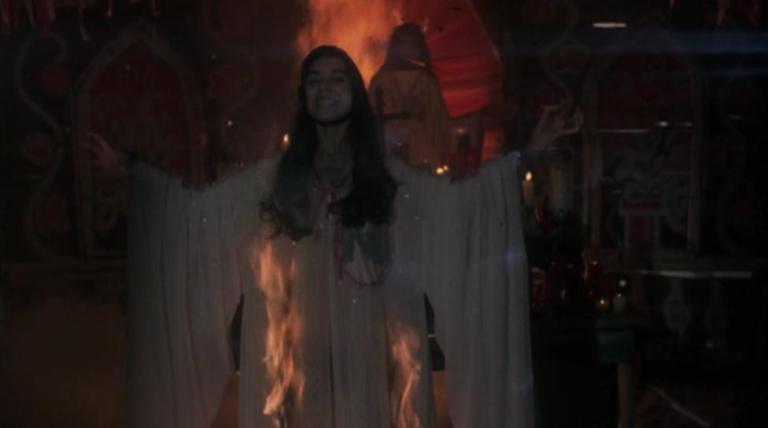 13 years later, the original novel’s author William Peter Blatty helmed the third installment, The Exorcist III, which is my personal favorite of the franchise (I said favorite, not best, calm down). It follows beleaguered detective Kinderman (George C. Scott) who is investigating a string of murders identical to those of the Gemini Killer, a serial killer who died 15 years ago. His search leads him to discover that the body of Father Karras (Jason Miller) has been possessed by the soul of the killer in order to get revenge on Karras for the first film’s exorcism and is residing in a mental health facility. It’s as wild as it sounds, but also very grounded in a strange way, similar to the original. (Sidenote: I have not watched the director’s cut yet, but am very eager to.)

One of the things I like about the sequels is that they have these well-respected, serious actors just hamming it all the way the fuck up. There’s a part in The Heretic where Richard Burton punches through the chest of a demon and rips its heart out so I mean of course it’s better than the original, and Burton is totally committed to the moment. It’s hilarious but also just gripping. In III George C. Scott is just pissed off and yelling at everyone in each scene, so that’s a lot of fun.

The rest of the performances excel. Jason Miller is great to see reprise his tired priest, and Scott Wilson is always a welcome presence. Brad Dourif steals the film though, as the manifestation of the Gemini Killer. He’s just creepy and animated in such a gripping manner. It’s a reminder he’s actually a really good actor. Also, Knicks legend Patrick Ewing appears as an angel in a dream sequence, so that’s awesome. I desperately want to know how that happen, is Blatty a Knicks fan? Is Ewing a huge Exorcist fan? Who approached who about it? We deserve answers.

III has one of the best jump scares I’ve ever seen. I don’t want to give it away, but it’s become so popular that I feel safe discussing it. In fact, I’ll just include the photo below. There’s a really long still shot of a nurse checking rooms at night, and then all of the sudden you see a white robed person with giant scissors bum-rush this poor nurse out of nowhere. It’s a great use of a slow burn pacing and still camera, you’re just sitting there for minutes waiting for something, anything to happen and then bam! You’re hit with just such a wild and arresting image that sticks with you.

I’m going to watch the prequel films next, and yes I know they are both going to be a mess because they just made the same film twice with different directors with wildly different styles (Paul Schrader and Renny Fucking Harlin), but I’m okay with knowing that they are just going to be a mess. I don’t need the other films in the franchise to reach the heights of the original, I just need them to be themselves and be confident in their own identity, like the sequels are. I wish the sequels of other franchises could be so bold as these.

One thought on “In Defense of the ‘Exorcist’ Sequels”