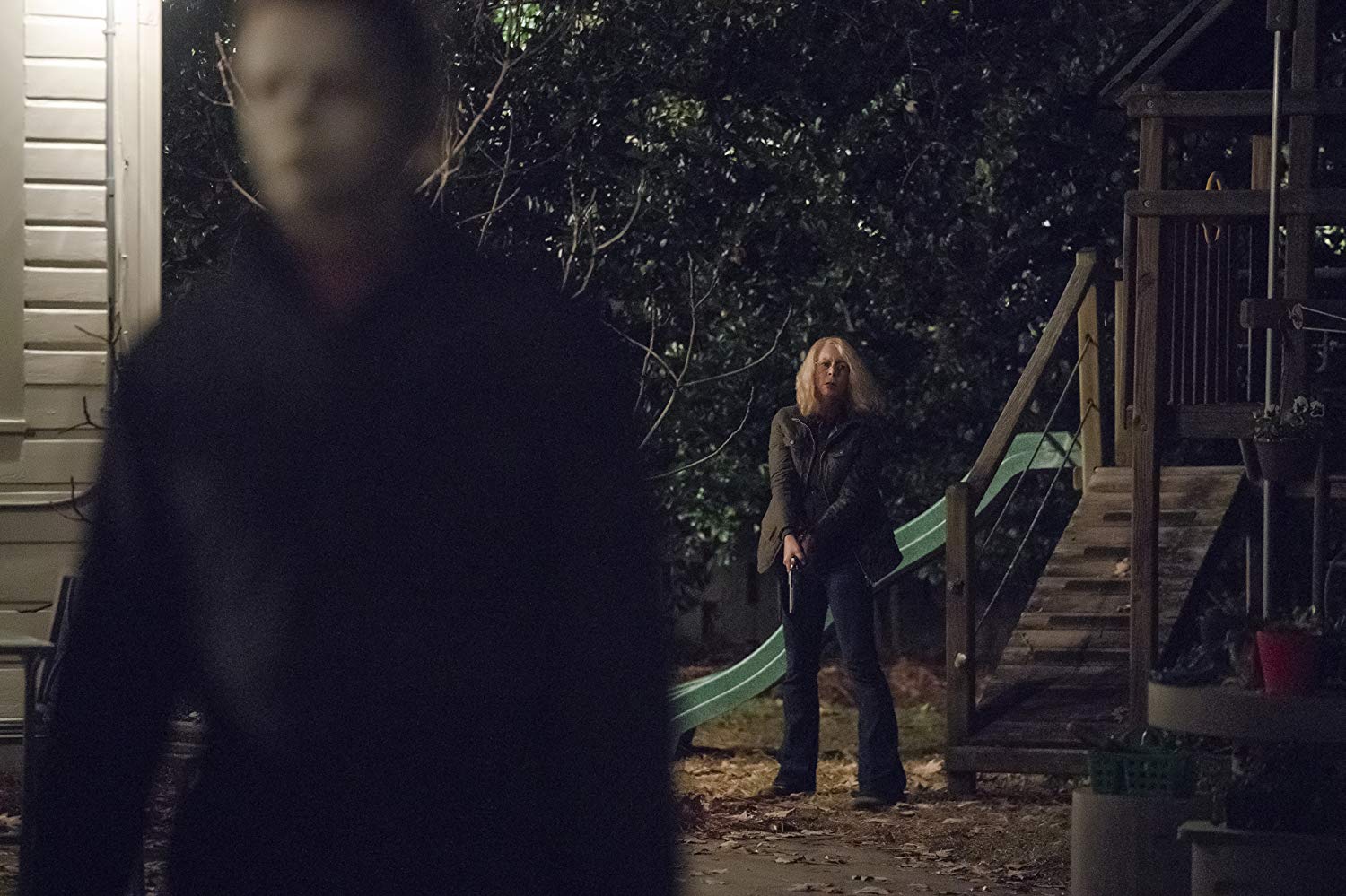 I almost didn’t go see this when I did Thursday night. I had a nasty cold come on, and was so exhausted I laid in bed for an hour straight without moving, and was this close to texting my buddies Huston and Robin that I had to skip out. But I didn’t. Not only am I so glad I dragged my ass out of bed for this, but also David Gordon Green’s Halloween was so damn good it actually cured my cold. I feel great now. John Carpenter’s original is a pillar of horror cinema, there’s a reason why we still watch it and love it 40 years later. I actually enjoy the sequels for the most part, though I can’t say that any of them operate on the same level as the original. There’s some genuinely great stuff in Halloween II, Season of the Witch is a lot of fun, and 4 and 5 are enjoyable just to watch Donald Pleasance ham it all the way up. The Rob Zombie remakes are like if somebody farted directly into your eyes and ears for two whole movies. Those are terrible films. By ignoring all the sequels after the original and making a sequel to the first film only, David Gordon Green’s take is the first sequel in the franchise that is actually as good as the original.

Picking up 40 years after that fateful Halloween night, Michael Myers escapes custody during a transport from the mental hospital he’s been at for 4 decades and makes his way back to Haddonfield to kill Laurie Strode (Jamie Lee Curtis), who has been haunted and traumatized by what happened 4 decades ago and now lives an alienated life from her family.

David Gordon Green and his cinematographer Michael Simmonds make magic here. They use natural lighting throughout the whole film, making due with whatever lights are in the houses. They boldly light a lot of nighttime exteriors with cop car lights. These are some big risks that pay off, giving a sense of authenticity to the terror while also really working the shadowplay of the setting to enhance the tension. While McBride and Green do ignore the sequels, they pay pretty great tribute to them in ways that don’t detract from the forward momentum of this film. They echo back to a great one-take sequence in Halloween II by crafting their own series of extended takes throughout a similar sequence. There are some terrific iconic shots throughout of both Michael Myers and Laurie, one where you see Michael’s reflection appear in a window like a ghost, and another where they remake a great shot from Halloween II but switch it up by having Laurie’s face burst out of the darkness. All the gore is done via practical effects, making it gnarly and scary like it should be. John Carpenter returns to do the score, and it’s one of his finest works. He still finds a way after all this time to conjure up new variations on his classic score. It’s intimate, scary, epic and endlessly iconic.

The cast is a winning one across the board. Jamie Lee Curtis is phenomenal in her return to her iconic role. Her update on Laurie Strode finds her living with trauma for decades, and you feel it in each interaction that Curtis has just from her mere screen presence. The film doubles as a character study of the effects of trauma, and succeeds because of Curtis. The film gets absolutely bonkers in its final minutes, but is able to do so gloriously because it retains its emotional roots in the performance from Curtis. I would love to see an Oscars ceremony where horror films like Hereditary and Halloween compete in the best actress category, because those are the two best performances I’ve seen this year. Judy Greer is an actress I always love watching, she’s never delivered a lacking performance even though she’s constantly handed terrible roles. Through her performance you see how trauma is handed down through generations. Greer delivers a single word (you’ll know it when you see it) at one point in the film so excellently that sent the audience into a frenzy, it’s a terrific moment she just slam dunks. Andi Matichak is a nice discovery as Laurie’s granddaughter Allyson, there’s just something about her that grabs you, she’s able to hold her own against seasoned vets like Curtis and Greer. I always like watching Toby Huss and Will Patton, and Haluk Bilginer is a lot of fun as “New Loomis” Dr. Sartain, channeling the camp and urgency of Donald Pleasance. Julian however is my favorite character in this film, wonderfully and hilariously played by Jibrail Nantambu. He just owns every single second he’s in this film, that kid is going to be a star.

It is truly a blessing that we got a Halloween film co-written by Danny McBride and directed by David Gordon Green. There’s just little aspects that they brought to the film and the genre that really add up to making the film something special. Only in a Halloween film done by these two would we get Toby Huss in the cast, or the exchange between a son and dad with the son telling his father he’d rather be dancing than hunting, or the creation of the glorious character of Julian. Just little bits of humor and heart that really contribute to the quality of the film. I just found myself going “YES!!!” under my breath and pumping my fists countless times. Me and my buddies Huston and Robin just kept looking at each other in excitement like we were watching a great basketball game. This could have easily just been a cash grab for all parties involved, but instead we got a sincerely well-crafted, fun and scary movie that lives up to the legacy of the original. This is easily one of the best times I’ve had at the theater this year, and I’m just so grateful we got a Halloween film as great as this after all this time.

One thought on “Review – Halloween”