Last Sunday should have belonged to Game of Thrones. It was a great episode, don’t get me wrong. Stunning visuals (Let’s just get this out of the way, the amount of bitching and moaning about the lighting in that episode is ridiculous. You’ve been watching this for almost a decade, you know what this show is. God forbid you had to experience discomfort and uncertainty for 5 damn minutes.), exciting battles and Ramin Djawadi brought the heat with his score. But days later, all I’m still thinking about from that night was the phenomenal episode of Barry – which I’ve talked about at length as the best show on television right now – that aired right after the battle of Winterfell. The episode, titled “ronny/lily”, had the worst prospects to air that night – it had to follow up the biggest episode of the biggest show. And against all odds, it beat the Night King. Barry aired a singular episode of television, one that was so monumental and transformative that emmys aren’t good enough. I’m not going to do much plot recap here. If you know, you know.

Bill Hader stepped behind the camera for this episode, and his direction in it is absolutely stunning. Even on the night of the battle of Winterfell, Game of Thrones didn’t have the best action sequence of the night – Barry did. After he feigns packing for Barry’s Chicago trip pitch, Ronny unleashes a judo kick that sends Barry cold through a closet door that was so fucking hard even my back hurt watching it. Hader lets the whole episode breathe in these long, unbroken takes that really enhances the intensity and grounded danger of the action. It lets the stuntwork shine as Barry and Ronny really go at it and wear each other down. It is a brutal fight that reminds me of the climactic fight in Unbreakable where it zigs and does something messy and human rather than something cleanly choreographed, and becomes all the more remarkable for it.

It’s then the episode starts to get weirder and weirder with each passing moment. Ronny’s daughter Lily comes home and it turns out she’s a good god damn prodigy at martial arts. She also, as Barry hilariously proclaims in a state of panic and exhaustion “I don’t think she’s of this world.” That line sent me into hysterics. Fuches also a minute later just decides she’s not human too. Lilly’s movements are like that of fucking Blade fighting, there’s just no way she’s human the way she jumps and moves around. Remember the fight scene in Star Wars Episode II where Yoda starts flipping around? It’s kind of like that. That shit just isn’t humanly possible.

When Barry goes around the house searching for Lily to give her the Chicago pitch, it rings true to Barry’s ability to balance comedy and drama. It’s funny just because it’s Bill Hader and he has a direct line to my funny bone, but also devastatingly dark because Barry still thinks he has control over the situation, a delusion worthy of Walter White. 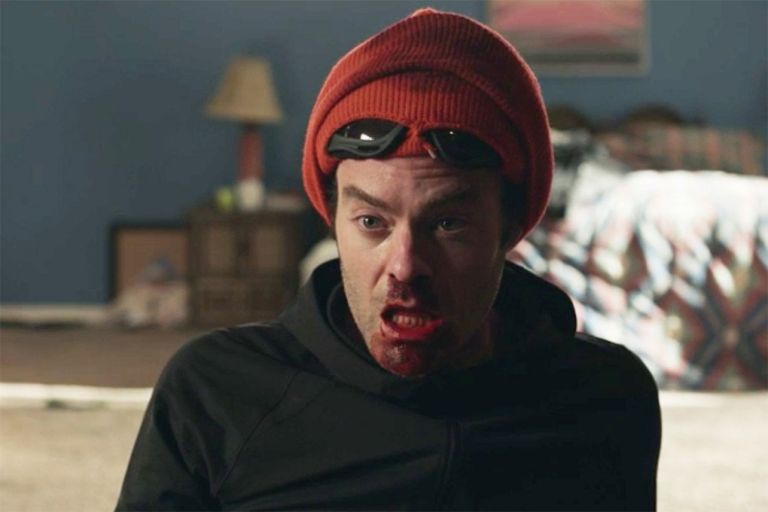 The episode exists on varying levels of heightened reality. On our most base reality, Barry is fighting a demon in the body of a small child as well as her unkillable father, and then we’ll drift into gorgeously haunting dream sequences of Barry meeting Fuches after he comes home from the middle east. All the other returning soldiers have families waiting for them, Barry just has Fuches. And at a certain level, their relationship is a transactional one of gain for Fuches. Only the ecstatic truth of the dream can inform Barry of this harsh truth.

One of the simplest choices by Hader goes such a long way. At the beginning of each episode, the opening scene will cut to the title card with a brief snippet of Charles Bradley’s “Change for the World” in an off-kilter, comedic way. The title card never came this episode. I kept waiting for it to pop up, and the fact that it never did kept me so subtly tense. I wanted to get to the next scene to escape this nightmare, but there was no escape.

Barry has been telling himself all season he deserves to get away with everything he’s done, and now he has the chance to truly do that – Loach is dead, the officers at the scene haven’t seen him, I’m not sure how real Lily is/that she would talk to cops, and there Fuches is waiting for him with the car – and he seems to reckon with the fact that he might not deserve to get away with it. The five different looks that flow across Barry’s face in the last shot is transcendent acting from Hader. It’s a damning moment that could really turn the season in a revelatory direction I did not see coming. Barry is the best show on television right now, it’s already top 5 in my favorites of all time, and this powerhouse episode is just one of the key reasons why. There are three episodes left this season, and I’m sure each one will continue to surprise me in ways I don’t see coming.