One of my favorite things about film is that there is always going to be more for me to discover. I’ve watched over 2,500 films so far in my life, but I love that there is always going to be more for me to dig into, there will always be little pockets of cinema for me to experience. Earlier this week, I had that wonderful feeling of uncovering a new little corner of film when I stumbled upon Kinji Fukasaku’s yakuza film series Battles Without Honor and Humanity, known as The Yakuza Papers stateside. They’re based on a series of articles (that are based off a memoir of a yakuza member) chronicling the history of the yakuza in post-WWII Hiroshima over 25 years. The central character is Shozo Hirono (Bunta Saguwara), a young displaced soldier who ends up joining the yakuza, rising through the ranks to form his own family. Released from 1973-1975, the films go in order of Battles Without Honor and Humanity, Hiroshima Death Match, Proxy War, Police Tactics and Final Episode.

The 70s were really great for crime/gangster films worldwide, there was a real sense of creation for the genre going on. In America, Coppola had The Godfather films and Scorsese was getting started with Mean Streets. The same was happening over in Japan. Seijun Suzuki is a godfather of gangster films and had been making some of the most insane and gorgeous gangster films since the 60s including Tokyo Drifter and Branded to Kill, and now other filmmakers were telling yakuza stories as well. In every country, there comes a time when a certain cinema renaissance happens, where all these great filmmakers just come up at the same time and define the cinematic language of their country that goes on to influence films all over the world. Japan had a renaissance that lasted decades, including the 70s. You had Akira Kurosawa inventing entire genres and cinematic languages with his samurai films, Yasujiro Ozu redefining the purpose of the still shot, and Suzuki experimenting with everything possible in his gangster films. Kinji Fukasaku is certainly one of those great Japanese filmmakers, with his Yakuza Papers series doing so much at once – being thrillingly entertaining as crime films while being a docudrama about the history of yakuza in Hiroshima. And here’s another great thing, today most film series have long running times, and I’m not saying there’s anything wrong with that, but it makes them more of a task to marathon. With The Yakuza Papers, they all clock in at an hour and 40 minutes each! The scope and rush of it all, it’s exhilarating pacing, how it follows multiple characters through the yakuza underworld – the construction and thrill of The Yakuza Papers would inspire and evolve into other film series like the Infernal Affairs trilogy and Nicolas Winding Refn’s Pusher trilogy. 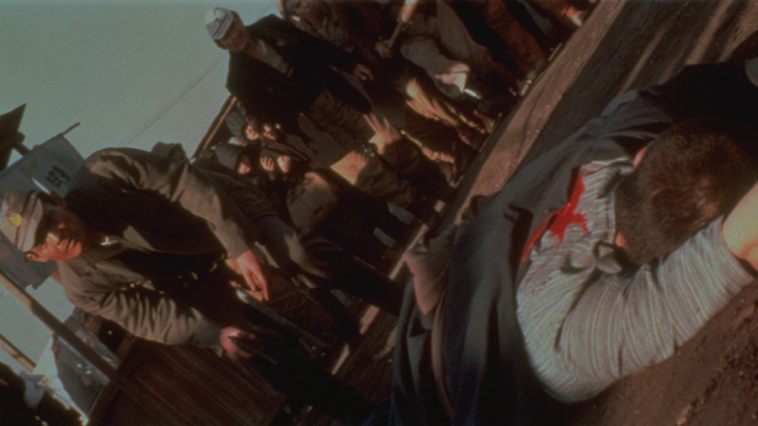 The series also manages a rare feat in that it succeeds at being this crazy violent work but while also serving as really fascinating social commentary for life in Hiroshima post WWII and the bombing. The first shot in the series is of an atom bomb detonating, and each film ends with the same shot, a slow zoom-out of a hollowed out building in Hiroshima that’s barely standing. The series begins in the months just after WWII with Hiroshima devastated. The opening scene, and the way we’re introduced to Shozo Hirono is when he and others take on some American GIs that are trying to rape a Japanese woman in public. That’s a pretty heavy way to start, but it really hammers in the immediacy and impact of life in Hiroshima at that time. Throughout the series, the settings always have this rundown, half-constructed feel to them, even decades afterward. The schemes and jobs they do to make money aren’t glamorous and flashy like other gangster films – Hirono’s family makes their money by guarding a scrap metal yard. The final film begins on the 20th anniversary of the bombing of Hiroshima. With each film, that final shot of the bombed out building becomes more and more poignant – these men are warring over a graveyard. To add to this, the films draw parallels between world events and the yakuza. As the Korean and Vietnam wars are raging, similar battles between two larger factions are being fought through the smaller groups in Hiroshima. Proxy War focuses the most on this, as it’s about, well, a proxy war like the ones we fought in Korea and Vietnam. After this film, Shozo lives with regret about all the young men who fought and died for the bosses higher up, and how he’s forgotten the faces of them – similar to feelings about our proxy wars.

There’s a nutty quality to the violence in this film. For example, at one point a guy sharpens the end of a shotgun and then guts a dude with it. Fukasaku films shootouts and fist-fights in this hyper-active handheld aesthetic with blood getting everywhere, there’s a refreshing sense that none of this is really choreographed. Adding to it is the fact that due to Japan having actual gun laws, guns are kind of hard to come by, most yakuza fight with katanas, knives or just their fists. Only the higher-ups really get to have a pistol of some sort. All of that just adds to the chaotic nature of the violence, everybody is just using what they have at arm’s length. Brawls between groups more closely resemble drunken fights than a choreographed action scene. And when people do get shot, they just eat the bullets. I watched dudes get shot like 8 times in the chest in this film and still writhe around and try to fight back. After escaping an assassination attempt unarmed, one character examines “It’s amazing how hard it is to hit something with a bullet.” There’s an almost cartoonish nature to it, which it seems to really embrace without losing the immediacy and docu-drama nature of the film. It’s an incredibly impressive line that it toes.

There’s one shot that just knocked me down when I saw it, so much that I paused it immediately to write this paragraph. There’s a shot in Police Tactics where blood gets sprayed on the lens, and either by pure preparation and craftsmanship or by the grace of the filmmaking gods, Fukasaku lines up the image perfectly with the shooter at the top between two blood stains pointing his pistol down at the victim at the bottom of the frame, just between blood stains as well. To make it even more impressive, the shot is handheld. Planned or not, it’s breathtaking. It’s a shot that needs to be seen to be believed.

The way Fukasaku handles the immense undertaking of five films is enough to make you break into sweat just thinking about it. There are dozens of characters you’re following in each film, and the films move at such a quick pace covering a lot of ground – it’s seriously awe-inspiring that you don’t get lost in all the chaos Fukasaku is flinging at you. It comes down to the strength of these characters, you know who they are and what they are after almost immediately and don’t have any trouble following them. There are no strict good guys in these films, just those that live by a more honorable code than others, and the fact that you’re so willing to follow these characters capable of such violence and repulsive act is a testament to the storytelling by Fukasaku as well as the terrific cast. Bunta Saguwara is a terrific leading man to last you five films, a steely demeanor with a vulnerability just peeking through underneath. I could spend 5 paragraphs listing off the rest of the performers, everybody brings their best stuff. It was a delight to see Jo Shishido, the muse of Seijun Suzuki and one of the coolest actors to grace the screen – up there with Steve McQueen, Alain Delon and Humphrey Bogart as icons that defined the aesthetic of “cool”- have a role in Final Episode. It’s also magnificent that the score for all the films is just 80% the same melody playing over nearly every scene, but you never get tired of it. It’s a dark, jazzy little number that I’ve been humming all week.

I realize now that I don’t have some grand thesis about these films, I just hope you watch them and experience the same excitement that I did in discovering a new pocket of cinema. Finding out about new films and filmmakers that you love and inspire you is just one of the best feelings I’ve ever had, and with film it just keeps on happening. Excuse me while I go watch like the 50 other films that Fukasaku made.