I like to watch something while I’m falling asleep, it’s lately become part of my nightly ritual. I rarely watch something serious that requires a high level of attention, after all, I’m falling asleep. It’s usually something more on the – for lack of a better word – stupid side (“Wait, there are 12 whole episodes of a SyFy show called Van Helsing on Netflix??? I’m in!”). Earlier this week I wanted to watch a dumb action film, but it had to have just the right balance. It had to be stupid enough that I wouldn’t feel bad about turning it off as my sleeping meds kicked in, but it also had to be exciting enough to hold my attention until said sleeping medication kicked in. I was having trouble, until I discovered the Steven Seagal classic Under Siege was streaming on HBO Now.

I hadn’t seen Under Siege in years. I watched it one night on cable back when watching movies on cable was still a thing people my age did, and while I remember really enjoying it I couldn’t remember much else. Let me tell you, Under Siege holds up. Under Siege has all the hallmarks of a great 90s action film. It had a villain who was a domestic threat rather than a foreign one. It had the signature 90s action film mark of being a post-Die Hard action film, setting the film in one primary location with a character in the wrong place at the wrong time. There were so many of these films in the 90s, and remarkably they’re all pretty great. We had Die Hard on a bus (Speed), Die Hard on an airplane (Con Air, Passenger 57, Air Force One) and Die Hard on an island (The Rock) among others. Under Siege was Die Hard on a battleship, and if that doesn’t do anything for you then why are you even reading this?

Directed by Andrew Davis, Under Siege was Seagal in his prime as he plays Casey Ryback, the head chef on a soon to be decommissioned battleship that still has nukes on it. A group of terrorists take over the battleship with the plan to sell the nukes to the highest bidder. Little do they know, Ryback isn’t just any chef, he’s a former navy seal.

There were so many great actors in this film. You had prime Gary Busey as the prick Commander Krill, who everybody hates and who ends up betraying his crew to spearhead the takeover. You got Tommy Lee Jones having the time of his life playing William Strannix, the wild hippie terrorist behind the takeover. Then you have several other great characters like Glenn Morshower, Colm Meaney and Raymond Cruz (Tuco on Breaking Bad! But real fans know him as the guy who delivered the incredible line “Oh yeah man I had MY SHIT PUSHED IN BRO BIG TIME” in Training Day)

I had a great time revisiting this enjoyable 90s action classic. My friend Huston told me the second film was also on HBO Now, how could I have missed that? I actually hadn’t ever seen the sequel, but as you can gather from everything about this column, I loved it. It’s a rare sequel that betters its (already great) original in every possible way. I apologize for spending so much time on Under Siege when the title of this column clearly states we’re here for the second film, but you have to understand what made Under Siege so great first to understand what made the sequel even better.

Directed by Geoff Murphy and co-written by Matt Reeves (!!!!), Under Siege 2 finds our favorite chef/ex-navy seal on a train with his estranged niece Sarah (A young Katherine Heigl) to bury her father and his brother. Along the way of course, a group of terrorists led by mad tech genius Travis Dane (Eric Bogosian) hijacks the train to use as a mobile station for hacking a satellite that has a vague power – it blows stuff up? It causes deep fault lines in the Earth to crack causing natural disasters? Whatever it is, it’s bad stuff and Ryback is the only one who can stop it.

Once again it checks off the hallmarks of a great 90s action film – domestic villain, Die Hard setting (this time on train!) – but then it ups the ante all over the place. The plot is way more insane and high stakes, I mean the villain is planning on blowing up the pentagon via satellite, that’s pretty up there. I also like that they keep the chef shtick from the first. In this film he owns his own restaurant, and effortlessly convinces the train staff to let him commandeer the kitchen to bake a cake. This leads to a great one-liner – by the way, this film is filled with one-liners – when he kills a key villain in the train’s kitchen and calmly proclaims “Nobody beats me in the kitchen.” 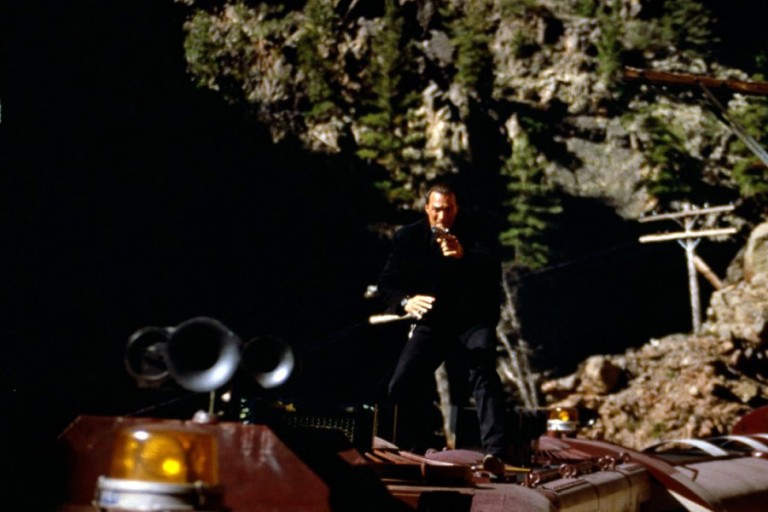 Like the first, it has a great cast with some solid character actors throughout. Eric Bogosian, an underrated character actor, is having a blast playing the insane Dane. We get an early look at Jonathan Banks, and this movie also has a young Morris Chestnut! (Sidenote: Morris Chestnut has aged extremely well!) Everett McGill (Big Ed on Twin Peaks) is almost unrecognizable as the calculative, sleazy right hand man to Dane. His hair is cut short and dyed blonde, it took me a third of the way through the film to realize it was him. He makes an excellent scumbag, at one point relishing to Sarah that “I’ve never been afraid of anybody, but that uncle of yours scares me…and I like it.”

This film plays like a straight-to-dvd sequel, and I fully %10000 mean that as a compliment. Straight-to-dvd sequels are my favorite subgenre of film. For every genuinely moving, artistic work of filmmaking, I’ve seen like 5 shitty straight-to-dvd action films that I loved just as much. One time I had an assignment to watch the artful and wondrous Lawrence, Anyways and write about it but then I saw The Man With the Iron Fists 2 was streaming so I watched that instead. The great thing about straight-to-dvd sequels is that it’s clear that they’re working with half the budget, but are trying for something twice as explosive and exciting as the predecessor, an insane undertaking. It’s an exercise in trying to be as engaging as possible every single scene. Under Siege 2 is certainly half the budget, but is twice as fun as the first and definitely twice as insane.

I don’t even know how to rank the top 10 most insane shit that happens in this film. Does it come when Seagal snaps a dude’s arm in half effortlessly, or when he snaps both wrists on another dude effortlessly? What about when he ditches a truck before it flies off a cliff for absolutely no reason at all other than it looks cool? How about when he rigs up a bomb with seemingly nothing but crisco butter and lighter fluid, throws it to a bad guy who catches it and reads the electronic message that reads “YOU’RE FUCKED” before it explodes? What about two trains colliding and Seagal running through carts to the end to jump off and catch the helicopter’s ladder? Believing that Seagal can actually run fast enough for any of that?

Seagal started to get out of shape in the 90s and never got back into shape, and you can feel it in these films. Especially the second film, you feel as if he told the filmmakers and fight coordinators to do whatever it took in order for himself to show the least physical effort. Imagine of Raymond Felton was thrown into an action film. Bartolo Colon is more athletic now than Seagal was back then. I’m not pointing this out as a knock on Seagal, it’s actually one of his greatest strengths as an action star. His laziness is admirable, and honestly riveting. It should be impossible to retain action hero status while totally out of shape, but he did, and I don’t think anyone else could have pulled it off. Every action hero has something that sets them apart from the others, and Seagal’s refusal to stay in shape and be physical with his fight scenes was what made him magnetic. I’m truly sad we never got more Under Siege films, because they practically write themselves and gave us Seagal at his greatest. Under Siege 2: Dark Territory is remarkably one of the greatest action sequels ever made.