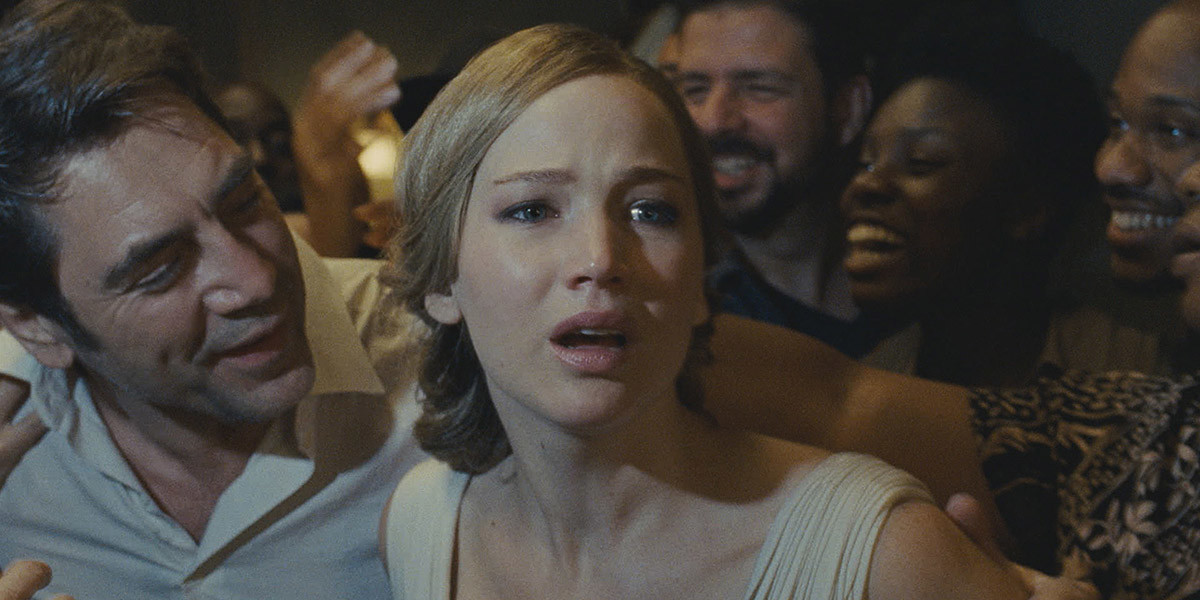 You should catch on in the first few images of mother! that this film is fucking bonkers. Darren Aronofsky is always quick to let you know that. You look at any of his films, you know in the opening scene that this is going to be unique, if nothing else. Noah begins with a slow-motion battle between biblical figures. Black Swan begins with an arresting nightmare of a ballet dance. The Fountain begins with a 16th century conquistador making a final push to the tree of life. Aronofosky has always set the tone and expectations quickly that you probably don’t know what you’re getting into, and he does so here again with the image of a woman engulfed in flames. Aronofsky’s latest follows that striking image with the tale of a young wife (Jennifer Lawrence) and her older poet husband (Javier Bardem) who live a life of bliss in a remote mansion whose peaceful isolation is disrupted when an older couple (Ed Harris and Michelle Pfieffer) invites themselves into their home.

Aronofsky reunites with his career cinematographer Matthew Libatique. He really makes the most out of the interior lighting, giving it an almost gothic feel in the ambient/natural lighting of lamps and windows. He keeps his camera primarily in closeups as he follows Lawrence around the house as a means of heightening the paranoia and loss of privacy she’s feeling. It works better in some scenes than others, after an hour plus of the same shots it can feel repetitive.

When you have a cast as talented as the foursome are, you’re going to get great work out of them. Unfortunately, I can’t say much more than that about the performances because a) it would give too much away and b) I hope this doesn’t give too much away but not all the performances have weight on the film’s final act. It’s here I’m going to not go quite into spoiler territory, but I will veer near the edge. After all, when you’re talking about this film, you’re talking about the last act.

My main issue lies with the fact that the first 2/3rds of the film have little bearing on the final act. It’s not that the proceeding hour plus to the movie’s true purpose is bad, it just has almost nothing to do with what follows. It’s as if Aronofsky decided at the 3rd act to make a completely different film while retaining the central characters. I wish the film had been that 3rd act film, because that final stretch is absolutely mesmerizing. In this time, the film reaches exhilarating heights of technical filmmaking prowess and metaphor-driven narrative. Aronofsky and Libatique conjure up hyper-tense imagery that gave me Children of Men flashbacks in the sheer scope, detail and insanity of how much was happening in any given frame. It seems Aronofsky wasn’t done with biblical figures after Noah, as mother! becomes a gripping examination of Jesus, religion, the heavenly mother and creation. I don’t want to go further into why it becomes about all these things, because experiencing it firsthand is essential to the film’s effect. My sister is getting her masters in women and religion, and I can’t wait to hear about the papers she’ll inevitably grade on this film.

If this film were made 30-40 years ago, we wouldn’t shut up about it. It would be taught in film courses and debated still. We’d be dissecting the final act scene by scene and pouring over every little detail in each shot.  What was it all about? Was it about how man ruins the good intentions of religion? Was it about the intrinsic misogyny in God’s creation of man, how the concept of the heavenly mother was erased from God’s narrative? I don’t know how to explain it, but the fact that it was made now seems to hinder its chance for analysis and appreciation. I don’t know if that’s the fault of us, the audience, or the filmmaker’s fault. It’s not fair to either party. Hopefully if you see this film you understand what I’m getting at. And I really do think you should see mother!, Aronofsky is a filmmaker that is going to leave everything he has in each film. There’s a masochistic quality to his filmmaking that I admire. Whether it hinders or helps the film, he never settles for making a tame film. The fact that a studio is still willing to fund and release a film like this is an act that should be encouraged.